Feed me, Seymour: The surprising similarities between Venus flytraps and our own brains

While normally I write about animals and/or their brains, today I’ll be talking about something that’s neither of those: Venus flytraps.

Venus flytraps are a plant native to the eastern coast of the US Carolinas. It lies at the intersection of a few peculiar plant categories, as it’s both carnivorous and capable of ‘rapid’ movement (meaning it’s faster than, say, sunflowers turning to face the sun over the course of a day). Carnivorous plants, as the name suggests, are those which can consume animals for nutrition. They’ve typically evolved in areas where the soil is sparse in nutrients required for their growth (often nitrogen), so somewhere along the way they developed the ability to get those nutrients from living animals – hence the ‘flytrap’ part of Venus flytrap. Fascinating as it may be that unexpected organisms like plants (or sea sponges) can become carnivorous, our focus here is on its rapid movement. Plants develop rapid movement for a variety of reasons, whether it be the flytrap closing its leaves around prey, the sensitive mimosa rapidly folding its leaves and branches when disturbed, or the sundews, which have long, sticky protrusions which curl around any unfortunate prey before digesting it. 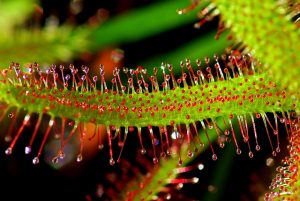 When an insect contracts these, the whole leaf ends up curling around it, further trapping it to be digested.

The flytrap has small ‘trigger hairs’ on the inside of its specialized leaves. 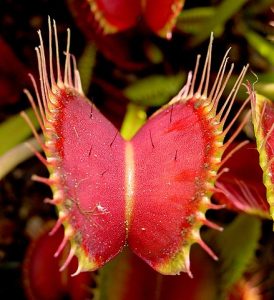 When two of those are touched within a few seconds of each other (*super* cool video at that link), the leaves of the trap close to (presumably) form a cage around the hapless insect within. 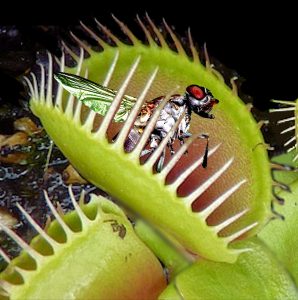 Then once closed, as an additional backup mechanism it closes further with additional hair triggers, and those ultimately induce release of digestive enzymes. The reason for two triggers and the timer is to prevent the trap from closing needlessly, though if closed, it can reopen. However once digestion is triggered in one of the traps, that trap cannot be reused, so needing multiple triggers ensures it only does so fruitfully. This whole process is actually similar to things like an escape response in animals, where often multiple sensory triggers in a short timespan are needed to induce, for example, an energetically costly escape response.

The ‘signaling’ from these hairs (and the sensitive mimosa/sundew) is a fascinating example of convergent evolution, where two organisms have a similar adaptation that isn’t from a common ancestor (if it does come from a common ancestor, that’s divergent evolution). Triggering the hairs induces an electrical signal caused by the movement of charged ions inside the flytrap (mostly calcium in this case). Animal neurons (cells in the brain, nerves, etc.) use the same kind of rapid electrical signals, called action potentials, to transmit information in the bodies of most animals. Below you can compare signals taken from similar recording devices (images from BYB), but one from a human heartbeat (through the skin) and the other from a flytrap, which is large enough that it can also be recorded without poking into the plant. 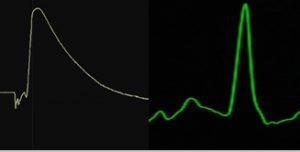 In general, the action potentials of the flytrap are much slower (you can actually watch them happen in an electrical recording over 1-2 seconds in a recording, as opposed to the 1-2 ms in our neurons). As mentioned above, their action potentials use calcium as the charged ion (the source of the electrical signal), whereas in our neurons, it is mostly a combination of sodium and potassium. As well, the motion in fast moving plants is mostly thought to be accomplished via changes in water tension, but the fast movement of muscles in animals is achieved through complex physical actions within those cells. Yet it is still astonishing how these plants ended up at the same ‘solution’ for fast signal transduction. In the sundew, when its outgrowths are triggered by contact with an insect, an action potential travels along the length of its leaves towards the middle of the plant as it curls inward, remarkably similar to how most sensory signals propagate centrally (towards our spine and brain) in our nervous systems. 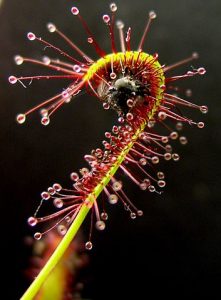 In this case, action potentials are being sent from where the insect is caught down the leave

Both signal transduction systems seem to have arisen for similar reasons. The current thinking is that the nervous system first emerged as a way of rapidly and efficiently connecting sensory information to motor output, akin to where we see action potentials in plants.

And of course, you must know that Darwin had something to say about Venus flytraps. In contrast with his…strong feelings on parasitic wasps, without even knowing most of what I shared above, he wrote “This plant, commonly called Venus’ fly-trap, from the rapidity and force of its movements, is one of the most wonderful in the world,” and he even went on to write a whole book about movement in plants. I’ll let you decide whether it’s the life-saving wasps or the plants which trap and slowly digest flies which are ‘most wonderful’.

Photo of insect in flytrap via Pixabay