Max Georgopoulos is a second year Bachelor of Commerce student from Aurora, Ontario. Last year he was a part of the Marketing stream on the Toronto Corporate Tour. Max says his experience with the Corporate Tour was nothing but positive. “We saw a wide range of businesses, from start-ups to large corporations like PepsiCo. I got a great scope of what marketing looks like across all types of companies. I also made awesome connections with people in various industries, which ended up opening multiple doors for me in the future.”

Max went on to say he, “would recommend the Toronto Corporate Tour 100%” because he felt that getting an inside look at various companies gives students a better idea of what type of company they might want to work for in their co-op terms and in their career. 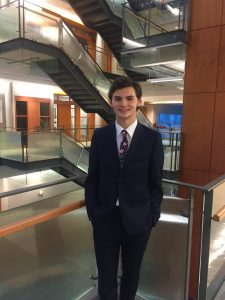 Max emphasized the importance of industry connections. Max says, “Having the right connections is one of the biggest factors in landing the job you want.” Max felt the greatest benefit of the Toronto Corporate Tour was networking, describing it as, “a great climate to make connections in, since these employers see you as an initiative-taker who cares about his/her career before you even open your mouth to speak. Good first impression if you ask me.”

“Networking on the tour ended up landing me two jobs: one at Mosaic over the summer and one at a Nudge Rewards for my current co-op. The co-op jobs that some of my friends landed were also a result of a connection that they made on the tour. Without the tour, neither me nor my friends would have been aware of these opportunities, let alone gotten the job. Go on the tour!”

For more information on the Toronto Corporate Tour attend the information session on January 25th or go to dal.ca/mcs/corporatetours.