Kara is a fourth-year Bachelor of Commerce student majoring in Finance. She grew up in Ottawa but has an affinity for the east coast. She’s been visiting Nova Scotia twice a year for most of her life as the rest of her family lives in Halifax. When she started looking into universities, she always knew that she wanted to go to school out east. She was interested in business, and Dalhousie’s Commerce co-op program with mandatory co-op was a great fit. Kara grew up playing competitive hockey and she loves the outdoors. In her free time, she enjoys spending time with friends, going hiking, canoeing and camping. Kara is hoping to have the chance to visit Peru and trekking the Inca Trail to Machu Picchu, traveling around Ecuador, and Iceland before she begins working full time at KPMG. 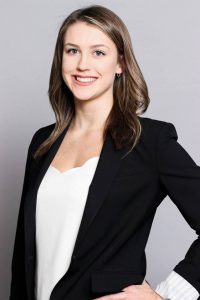 Kara worked as a Management Consultant within KPMG’s Finance Transformation Service Line. She was attracted to the job because “The team works on complex and critical projects to maximize finance function performance and increase value to the business by providing a range of financial management services. KPMG is a leader in management consulting, and even more importantly, there seemed to be a great culture fit” she said.

Kara added, “I found having three co-op terms extremely helpful in identifying my interests and skills. Through joining DALIS (Dalhousie Investment Society) in my first year, I discovered my interest in finance. After completing my first co-op in Treasury at George Weston, I came across a job posting for a position with RBC Capital Markets in Strategy. I found the combination of finance and strategy exciting and had a great term with that team, almost everyone had previously worked as a management consultant. Through talking to team members about their career paths, I learned more about the consulting world and decided that’s where I wanted to work. After that, I researched intensively and prepared myself for the consulting interview process – eventually bringing me to KPMG Management Consulting”.

Kara is a heavily involved in Dalhousie campus life. She said her on-campus involvement grew through word-of-mouth initially. “I would listen to other people talk about what they were doing and from there I did my own research to decide what to join. In my first year, although I never rowed before, I decided to join the learn-to-row program. In my final year at Dalhousie, I had the opportunity to compete on the varsity rowing team!

“On-campus involvement has been a key driver for my skill development. Since coming to Dalhousie, I have consistently been involved with the multiple societies, varsity rowing, intramurals, case competitions, volunteering, and part-time employment. This involvement allowed me to improve my leadership, communication, organization, and drive, while also expanding my network.”

Kara’s short term-goal is to start working with KPMG Management Consulting in September as a Consultant for the Finance Strategy and Transformation Service Line. She is thrilled to be re-joining such a fantastic team and would love to take a leadership role to help KPMG affect change in other organizations. In the long-term, she is unsure of where her career will take her. Ideally, she would love to work as a full-time consultant and stay long-term to grow her position within KPMG.

Tips of the week from Kara about on-campus involvement and job search strategy:

“I would advise other students to figure out what they’re interested in through extra-curriculars, courses, and information available from Management Career Services. From there, figure out where your strengths align. When preparing for interviews, I found it was important to connect with others that have gone through similar processes and begin preparation based on their feedback. I would also advise students to try something at least once. If you see a poster advertising something that you might find interesting, give it a try. The worst-case scenario is that you don’t return for a second time; but at least then you’ll know”.

“MCS has many resources available to help research different career opportunities. MCS helped me to learn more about my interests and how to better prepare for the interview process.”