How did you l 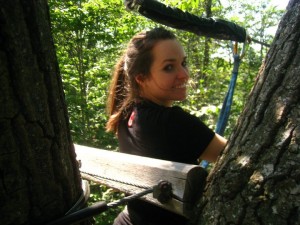 What inspired you to attend an MCS workshop?
“When I first discovered the MCS workshops I was in the process of looking for a summer job. I was having difficulty writing a resume and cover letter and decided to attend the Cover Letter Workshops for guidance. After the workshop I realized how helpful it was and signed up for several others.”

Which workshops did you attend?

What was the most effective/ informative take-away you learned from the MCS workshop?
“The most effective take away was from the Informational Interview Workshop. I had been nervous to ask people for their time and unsure what questions to ask. After the workshop I realized the MANY benefits of an informational interview.”

“From the tips and tricks I received, I gathered my courage, requested and conducted an informational interview with the forensic accountants at a big four accounting firm. The accountants then introduced me to the head of recruiting at Ottawa’s Ernst and Young …. and guess what?  I landed a position for my first (and second) co-op work term.”

Did you apply any of the tips/ tricks learned throughout your job search and/or on the job?
“Shortly after the MCS Career Success Workshops, I attended the Corporate Tour. On the tour I referred to the lessons I learned during the Networking Workshop. The tour was a great opportunity to practice and apply my networking skills in a real-life business atmosphere.”

What would you tell your fellow students about MCS workshops?
“There’s no doubt that the advice and support provided in the MCS Career Success Workshops Series played a large part in my success finding (and securing) employment.  Anyone can take advantage of the advice and help offered by simply attending a workshop. You never know where it may lead.”