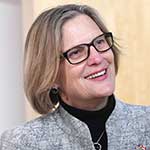 A fundamental curiosity defines Kathryn D. Sullivan’s (1951-present) life as a scientist, astronaut, explorer and teacher. It may have all started with the blueprints her father, an aerospace engineer, brought home from work when she was a small child.

“I remember crawling over those blueprints,” she recalls with a laugh, noting she could’ve ruined them but her father never objected. “I’d get entranced, as a three-year-old would, tracing a line.”

Her father’s encouraging questions about those blueprints and her mother’s deep interest in cultures and worldly affairs nurtured Dr. Sullivan’s childhood embrace of conversation, critical thinking and discovery.

In 1973, Dr. Sullivan began her PhD in Geology at Dalhousie. It was only a decade or so earlier that the scientific community had accepted and modernized the Theory of Continental Drift based on evidence of plate tectonics. Dr. Sullivan was fascinated by this new area of study, and Dalhousie professors Charlotte and Mike Keen were at the forefront of plate tectonics research at the time.

During her doctorate, Dr. Sullivan studied sea mountains in the Grand Banks area off Newfoundland’s coast, research offering insights to help chart early history of the Atlantic Ocean. She planned and executed a number of sea-bound research expeditions that fed her desire for exploration. “That was clearly the pinnacle for me,” she says of her studies — but there were even greater career highs ahead.

In 1976-77, near the end of her doctorate at Dal, the National Aeronautics and Space Administration (NASA) was recruiting a new class of astronauts — the first ever to include women. Dr. Sullivan’s brother encouraged her to apply. The nudge from her brother was one thing, but the parallels she identified between ocean expeditions and space expeditions were what made her move.

“To get to see Earth with my own eyes, from that vantage point — the same one I’d seen in all the cool pictures in National Geographic and on television growing up —that was irresistible,” she says.

In 1978 — the same year she completed her PhD — Dr. Sullivan was one 35 individuals (and one of six women) selected from an applicant pool of 9,000 to train as astronauts. She became the first American woman to walk in space in 1984, and then helped deploy the revolutionary Hubble Space Telescope in 1990. She finished her time with NASA on a third and final mission in 1992.

Most recently, Dr. Sullivan served as Under Secretary of Commerce for Oceans & Atmosphere in the United States and National Oceanic and Atmospheric Administration (NOAA) Administrator. Deemed “the world’s weatherwoman” in TIME Magazine’s list of the 100 most influential people, she led the U.S. agency responsible for environmental research, climate monitoring, daily weather forecasts and severe storm warnings.

Dr. Sullivan’s self-described “antenna for adventure and exploration” has been life-long, converting her passions to achievements that only a select few have accomplished. From space to sea and everything in between, she remains a true pioneer.

Congratulations to Dalhousie’s Team entered into the EAGE Laurie Dake Challenge, and now proceeding to the world finals in Copenhagen.

Teams are required to analyze and propose a Field development plan for a discovered hydrocarbon resource. Each team is required to submit the Field plan and development in the format requested by the judges, and based on this submission, the six finalist teams are selected. All teams work with the same data set, which is provided by a different company each year.