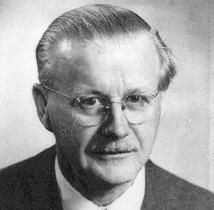 I transmit the regrets and condolences of many geologists who would like to be here, but are this weekend participating in the Annual Colloquium of the Atlantic Geoscience Society, this year in Truro.

It is an honour to be speaking on behalf of a person who touched my life and influenced me in more ways than I had realized. I will not mention all the names of those who wrote nice things about Dr. Milligan, because it would take me too long; I’m sorry for the omissions.

I was hired for one year while Dr. Milligan was on sabbatical absence. We (with 3 children and my recently widowed mother) occupied their house in Parker Street and the Milligan family sort of adopted us.

Dr. Milligan (I only started calling him Clint 15 years later), was the kind of person who inspired that kind of respect. When I opened his office in the Dunn Building in early January 1973 I found detailed instructions on what he expected me to do and teach. First was an apology and a pile of Structural Geology assignments in yellow bristol board, which he had no time to grade; I was lucky that I had learned analytical geometry while studying engineering, because he taught a projection system that few geologists would know how to handle. He believed that geologists should be able to think and solve problems in three dimensions and he was right. That was for Structural Geology. Since I was his replacement, I was to also teach four more courses that same term: Economic Geology I, Advanced Economic Geology II, a Seminar on Geology of the Canadian Shield, and Photogeology (the use of air photography in mapping geology). I am convinced that nobody in the department was aware that he taught five courses at a time. Just fresh from grad school, I had no teaching experience.

But teaching was not the only thing that Dr. Milligan did. To function, a geology department requires thin sections of rocks, and polished sections of ores for microscopic study. So, he built what I believe was the best thin sections laboratory in the country, adapted machines, and trained a technician who was able to rise to his very high expectations. Gordon Brown retired recently; for him Dr. Milligan was a father figure rather than a boss. The Department needed copies of line drawings, maps and manuscripts, and used an ancient “ozalid” machine that used light-sensitive paper which was developed by ammonia vapor; awful fumes wafted ominously through the Dunn Building. Well, Dr. Milligan was the only person who knew how to make it work properly, so he did. And then he was Undergraduate Advisor, meaning his half-closed office door was knocked at all times of day and evening, including weekends; the department was buzzing with activity after working hours.

And then there was an Open House day when the public came to visit the university. Geology students were remarkably cooperative and enthusiastic in showing what a geologist does: the common room was a full field camp with tents, sleeping bags, even a mock fire. 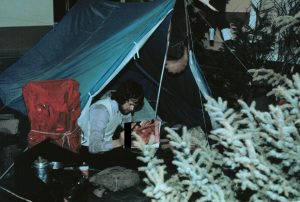 There were displays of microscopes, compasses, geology picks, minerals, rocks, fossils, gold panning. Who else was close enough to the students and knew how to organize people? So, Dr. Milligan did. And there was a mock-up of a volcano about 6 feet long and 4 feet tall, and a reddish chemical was lit up on its crater and spewed the most incredible fireworks and heavy smoke, to the delight of the visitors. But then we had to evacuate the floor until the presumably-toxic fumes dissipated. 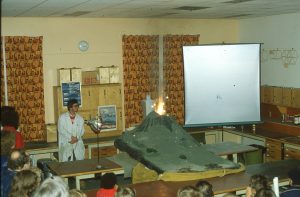 Dr. Milligan, taught Field Methods. In May there was Field School, and who organized the troops? The Field School was based at Crystal Cliffs camp, and later a Saint Francis Xavier residence, Antigonish. I was told that Dr. Milligan was less popular when he used a bugle to wake up the unenthusiastic, hungover students. Mapping exercises were at fossil-rich Arisaig, Northumberland Strait, near a place called Malignant Cove (after the ship Malignant, which ran aground there during the American Revolution); the students called it Milligan Cove. Epic were the traverses along the brooks: in those years the woods were knee-deep in snow in May. Dr. Milligan taught an ingenious method he had developed in Manitoba, to plot accurate geological maps along brooks. While recording the geology, the student counted paces following only 2 directions on the compass: say so many paces to the north, then turned at right angles to the east across the brook, so many paces, then turned north, then east, and so on. The track was simple to keep up in 2 columns in the notebook, and the zig-zag maps were extremely easy to plot on graph paper.

Where did Dr. Milligan learn all these geometric and accurate things? Once visiting him at the veteran’s hospital he told us about his work during the 1944 Italy campaign in World War II, because of his engineering training, he was ordered to advise the artillery generals of the deviation the gunners should apply due to the changing winds in the Apennines; not only did the winds change with altitude but depending on the time of the day. Assembling meteorological data transmitted from the field, he used high-powered trigonometry and geometry, with a slide rule (only gray-haired people know what I mean; they never ran out of charge. Because some targets were up to 20 km away, he said deviations from the bullseye due to wind could be 2 km or more. He recounted with pride that once he had a hard time persuading the general of a particularly tricky wind situation near the Adriatic Sea; he insisted and was the temporary hero when the artillery shot hit exactly on the roof of a Nazi ammunitions depot near Ravenna. 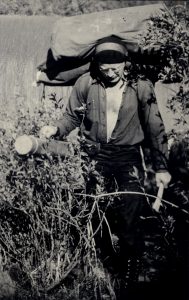 Casey Ravenhurst PhD, 1987), remembers: “He always wore a neck brace because of wear and tear from the thump line(?) he used to carry heavy packs full of rocks out of the bush”.
His work in Manitoba in the 50s left a lasting impact. I had seen references to a Milligan (1960) publication (Geology of the Lynn Lake district; Manitoba Mines Branch, Publication 57-1, massive 317p) so I wrote to Dr. Scott Anderson (1998 PhD of one of Dr, Milligan’s ex-students, Professor Becky Jamieson), current Chief Geologist of the institution, now renamed “Growth, Enterprise and Trade”, about what his organization considered its impact to be; within minutes he answered, and I quote:

“Sorry to learn of the passing of G.C. Milligan. A well-worn copy of Publication 57-1 resides on a shelf in my office. This publication was noteworthy for a number of reasons. It was the first regional-scale compilation of the Lynn Lake belt – one of the most important Paleoproterozoic greenstone belts in the world. As Milligan states in the introduction, the geological maps that accompanied the report covered an area of approximately 3,630 square miles, or “…a little less than half the area of Massachusetts.” The preliminary mapping was completed between 1946 and 1950 by a large team of geologists that included Milligan, just after the discovery of the famous Lynn Lake nickel sulphide deposit. Prior to 1953, the only access to the area was by canoe or floatplane. Milligan followed up the preliminary mapping with more detailed work during the field seasons of 1954 and 1955, and parts of 1956 and 1958. Unfortunately, much of the preliminary mapping was done using inaccurate and highly distorted base maps (the best available at that time). In order to produce a set of maps of “reasonable accuracy and consistency”, Milligan went through the laborious process of reconstructing the original mapping, including more than 3000 miles of traverse lines, by checking the original field notes and maps of each geologist against aerial photographs to identify locations of mapped outcrop. Milligan then compiled and synthesized all available geological information, resulting in a publication that represented a truly monumental achievement, which has helped guide research and exploration in the Lynn Lake belt for more than 50 years.” * (at the bottom, see additional evaluation of the same work by a retired Manitoba Survey geologist)

Frank Nolan (BSc, 1963), one of his early students, who liked Dr. Milligan very much and recently visited him at Camp Hill, said to me: “Milligan was a pretty humble guy who wouldn’t think of bragging about his accomplishments.”

“Reasonable accuracy and consistency” were very important to Dr. Milligan, and he expected it from his students. Craig Miller (BSc (Honours) 1974; MSc 1979) wrote: “One of his mantras was that although interpretations change, good descriptions don’t. For an exam in structural geology, 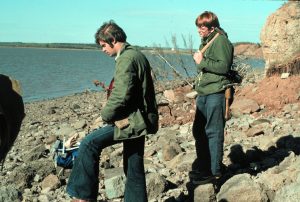 Dr Milligan handed out the thick map package from his memoir on the Lynn Lake area. The exam consisted of a number of questions on structural geology related to the maps. When he reviewed the exam in class, he said that if his interpretations were taken as being the right answer, we all failed miserably. However, he said that many of our arguments were good ones, and that he had to dig out his original field notes to prove us wrong”.

His former undergraduate students use expressions like: David MacDonald (BSc, 1982) “He was a true gentleman” , Peter Thomas (BSc(Honours), 1980) “Dr. Milligan was my favourite professor”; “He was a great role model for scores of young geologists”. “In my undergraduate days one year I was the only student to enroll in his 4th year Structural Geology. He taught it anyway, one afternoon a week, in his office. Best course I ever took!”.

“Stories of his adventures in Labrador and the Manitoba bush, and stories of those who were his mentors, filled our heads with possibilities”.
Labrador Expedition, 1947 (PDF – 10 Mb)

Thomas Duffett (BSc 1979; Geologic Technologist, and Instructor at Dalhousie) wrote: Dr. Milligan is the main reason I stayed in geology. My marks were never stellar, but he saw past the marks and encouraged me to continue, and 43 years later, I am still going strong-ish. He taught us how to map using the most basic tools…techniques that I try to pass on to our current students as I instruct at current field schools.”

I was particularly touched by what a former Icelandic graduate student (Johann Helgason – PhD, 1983, now with the Geological Survey of Iceland) wrote: “I vividly recall the times that I and Nancy Gruver-Van Wagoner (PhD 1981) went over to the Dunn Building and took lessons on Mid-Ocean Ridges with Dr. Milligan and he would bring in people like Dr. Charlotte Keen from the Geological Survey of Canada at BIO. We looked at the ocean ridge phenomena from various new angles and learned a lot. He is missed.”

Dr. George Clinton Milligan and his wife Bobby frequently opened their home to students and colleagues, in a warm and generous way that is rarely experienced these days. My granddaughter Mallory Williams-Zentilli visited Clint in my name at the veterans’ hospital, where she was volunteering as a Dalhousie Nursing student; she said: “Tata, you have to visit him soon”. I had scheduled to visit him on Thursday 25th at 11:30 and had printed some documents that I wanted to share with him about the recent passing, in Italy, of his former student and colleague Fab Aumento (PhD 1965). Clint left us on Tuesday the 23rd.

For me Clint was a true gentleman, unassuming, a kind but demanding mentor, a friend and an example of unstinting dedication to students. When he retired as Emeritus Professor, the Department held a Symposium on Undergraduate Geology Education in his honour, and our best lecture room in the building is known as the Milligan Room.

I end by quoting one of his former students:

Dr. Milligan was “A true Geologist in every sense of the word and I am extremely proud to have been touched by his shadow. We all are.”