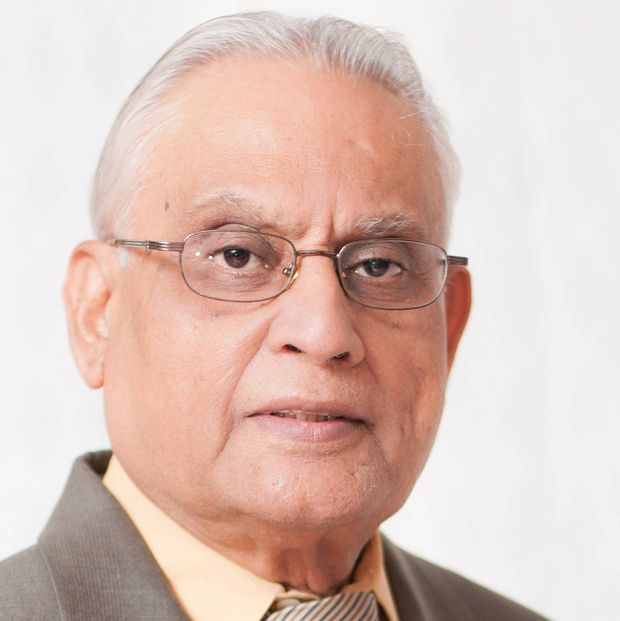 Prasanta Sarkar was born in pre-independence India during tumultuous times. As a child, he witnessed gaunt victims of the Bengal famine dying quietly on the crowded sidewalks and the bombing of a nearby gun factory. He then watched the chaos of India’s partition, during which he lost his father. But there was still time for fun. He developed a lifelong love for soccer and test cricket and, in the last half of his life, he was a devoted – if never uncritical – Toronto Blue Jays fan.

Prasanta was accepted into Stanford University but couldn’t raise the ship fare to leave the country. He studied geology at University of Calcutta instead – and dabbled in politics on the side. In 1963, he gained a life partner in an arranged marriage to Ruma, a city girl from New Delhi. His career in India’s emerging mining industry took them to remote parts of the country, much to my mom’s chagrin. Always the adventurer, he once participated on a man-eating tiger hunt, a story he rolled out with flourish for his wide-eyed grandchildren.

Prasanta and Ruma moved to Japan in the late 1960s when he joined a Japanese mining firm. But inspired by Pierre Trudeau – and a visit to the Canadian pavilion at Expo 1970 in Osaka – he chose Canada as our family’s new home. He went first and we joined him after my brother, Rana, was born. I remember my father standing at Halifax Airport wearing his familiar Wayfarer glasses as we descended down the stairs. He smelled of Old Spice and cigarettes – a familiar smell.

Prasanta pursued his PhD in geochemistry at Dalhousie University and we grew up riding bikes, roller-skating and immersing ourselves in pop culture. With Dad, we pored over atlases and almanacs, watched current-event shows and played our favourite game, “Find the Country,” using magnets on our metal globe.

He was a Killam Scholar and his PhD research led to the discovery of a tin mine in Nova Scotia. Prasanta founded Krigold Resources and spent months working in northern Ontario and Africa. His mining ventures were bold but seldom lucrative. He made and lost fortunes but was happy knowing he provided livelihoods in First Nations reserves and in remote villages around the globe.

We grew up with freedom, but also one caveat: do well academically. My Dad worried we were disadvantaged by our skin tone and insisted we work harder for it. In his later years, he mellowed, exploring spirituality, yoga and homeopathy. Prasanta’s laser focus then turned to a new passion, his grandchildren. He also wrote and published his memoir Shackles of Independence – A Memoir of an Unknown Indian for them. He suddenly passed away while writing “Part 2, the Canadian years.” In his last days, he was studying for his driving test and writing his 80th birthday party speech.

Prasanta left us stacks of newspapers, books and magazines full of marginalia and annotations despite losing most of his reading eye sight to diabetes. He also commissioned a pencil drawing of Lester B. Pearson to honour Pearson’s role in founding the pluralistic, progressive Canada we know today. He was that sort of Canadian. He truly believed our best days were ahead.

Lives Lived celebrates the everyday, extraordinary, unheralded lives of Canadians who have recently passed. To learn how to share the story of a family member or friend, go online to tgam.ca/livesguide

Sam Akande was our PhD student (1983) – studied Gays River Zinc mine in NS. Has had an outstanding career in geoscience education in Africa,

2015 Grover E. Murray Memorial Distinguished Educator Award of AAPG. The Grover E. Murray Memorial Distinguished Educator Award is given in recognition of distinguished and outstanding contributions to geological education. Only one award is to be given per year unless funding is approved by the Executive Committee when the award slate is approved. Contributions leading to consideration for this award will most often involve the teaching and counseling of students at the university level, and contributions to the education of the public, and management of educational programs may also be recognized.