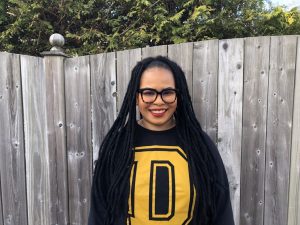 Shamir Hutcheson is the valedictorian for the Bachelor of Commerce Class of 2021 for our fall graduation celebrations. Shamir grew up on the island of Grand Bahama in the city of Freeport. At twenty-one she moved to Marietta, Georgia to do her associates degree in communications. Shamir lived in Marietta for two years and after she graduated with her associates degree, she moved to Halifax to pursue her Bachelor of Commerce degree at Dalhousie.

Q: What made you choose Dalhousie?

A: I had graduated from a College in Georgia, and became tired of living in the United States. I explored a variety of schools and had a cousin that actually attended Dalhousie. My choices were between Dalhousie and another university. I knew that I only wanted to apply to one school, so I just flipped the coin and was Dal bound.

Q: What will you miss most about your time at Dal?

A: What I will miss most is the camaraderie with my classmates. A lot of the classes that I had in the final parts of my degree involved group work, so I made a lot friends during those classes, and we often ended up in many more together in our final year. We would often choose the same group because we knew as a group, we were productive.

Q: What’s your favorite memory from your time at Dal?

A: I was academically dismissed at one point, and I had to take a two-week intensive course with the College of Continuing Education, and it helped me get back on track. That course really showed me the potential I had academically. It was mandatory to be in class by 8:45am every morning, if I was not in class, I would miss the full day as denied entry after that time. We had assignments due every night and if we didn’t hand the assignment in on time, we would miss the grade for that day. I think that was my most favorite memory because it showed me what I was capable of, you know, just, doing the work that I needed to get done within the time constraints that I had, and I think it just helped build my character.

A: As an international student I knew I needed to be proactive in my job search for my last coop since I wanted to stay and work in Canada. I had applied to several organizations, but there was one that really stood out to me because they do marketing for a company in the Bahamas. Currently. I am the Social Media Coordinator at Verb Interactive in Halifax.

Q: What is a fun fact about yourself that may surprise your classmates?

A: That I’ve been academically dismissed. I do have a reputation amongst my classmates for being very driven, taking the lead when we have assignments and just making sure that everything that we need to do is done. Just based on that, I don’t think anyone would have known that I was academically dismissed based on the type of work that I always submit.

Q: What’s something you learned during your time at Dal that you are looking forward to putting into practice?

A: Time management is crucial in university, but it’s even more crucial in agency life because things change at the drop of a hat. One minute everything can be smooth sailing, then the next moment everybody is running around like a chicken with their head cut off. You must be organized. Through the intensive course I developed strong organizational and time management skills because of the strict deadlines.

Q: What advice would you give to new students starting the program?

A: My advice to them would be not to wait until you’re underwater to reach out for help.
There had been many times I was just hitting rock bottom; things were not going well for me in my academics, and I was depressed, and I would not reach out to anyone. It wasn’t until I was academically dismissed that I realized I needed help. Dalhousie has numerous resources that can help students to get back on track. Also, make sure your professors knew who you are because if you are struggling they may be more inclined to assist you with improving your grades and helping set you up for success.