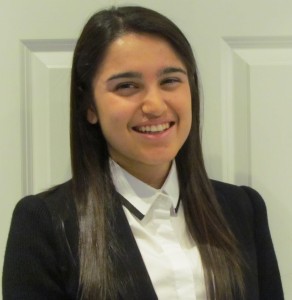 Meet Emilie D’Costa, a second-year Bachelor of Commerce student majoring in Finance.  She took an interest in capital markets during a “Take Your Kid to Work Day” where she spent the afternoon in CIBC’s trading room and had the opportunity to trade bond futures.  Six years later, she is completing her first co-op term at CIBC as an analyst on their securities lending team.  Receiving this job offer was greatly influenced by her networking with CIBC during the 2015 Toronto Corporate Tour.  Emilie discusses how she utilized this opportunity to make connections with her employer:

“I chose to participate in the 2015 Toronto Corporate Tour because I really wanted to do my co-op work term in Toronto.  Last April, I had just finished my first year at Dalhousie and had not made many connections in Toronto.  The Toronto Corporate Tour gave me the opportunity to meet several professionals from different parts of the financial industry who I wouldn’t have otherwise had the chance to meet.

The Toronto Corporate Tour is an action-packed three-day networking event divided into three streams: Finance, Marketing, and Career Discovery.  I chose to participate in the Finance stream of the tour.  We had the opportunity to visit and network with many potential employers, and we had the chance to practice our elevator pitches, do mock interviews, and work on our networking skills.  In addition to this, we visited several institutions, such as CIBC, RBC, and Scotiabank.  The Toronto Corporate Tour offers you a chance to learn about the different companies, how their application processes work, and about potential co-op opportunities at their company.

While on the Toronto Corporate Tour I networked with CIBC and met several contacts with whom I stayed in touch over the summer.  In September, when the banks began to post their jobs, I reached out to my contacts and told them I had applied and they helped me get an interview and eventually secure the position with the securities lending team at CIBC.  During the time I’ve spent networking, I’ve learned that employers really want to give back to students and help them get into the industry.

If you’re interested in working in Toronto for your work terms, the Toronto Corporate Tour is a great way to meet professionals you would not otherwise have the chance to meet.  It’s a really safe environment to put yourself out there and make valuable connections.”