Dalhousie will honour their top student athletes at the upcoming 13th annual Academic All-Canadian Luncheon.  They will be recognized in the presence of peers, professors and parents for their accomplishments.  According to standards set by Canadian Interuniversity Sport (CIS), to qualify as an academic all-Canadian, students must maintain a GPA of 80 percent or better over the academic year while competing in a varsity sport.

Congratulations to the following students from the Faculty of Health Professions who have achieved this honour:

School of Health and Human Performance 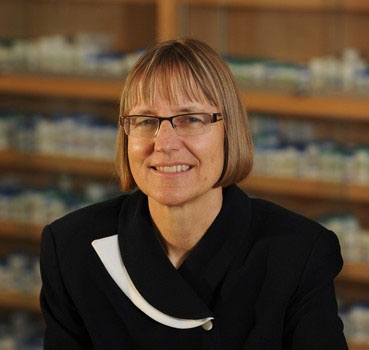 Dr. Ingrid Sketris (College of Pharmacy) is one of 60 researchers across Canada collaborating in various projects over the next five years examining the safety and effectiveness of prescription drugs once they’ve been made available to the public. Dalhousie has been awarded $1.975 million for their part in this project, which is being led by Dr. Adrian Levy in the Faculty of Medicine.

To learn more about this research, refer to the DalNews story. 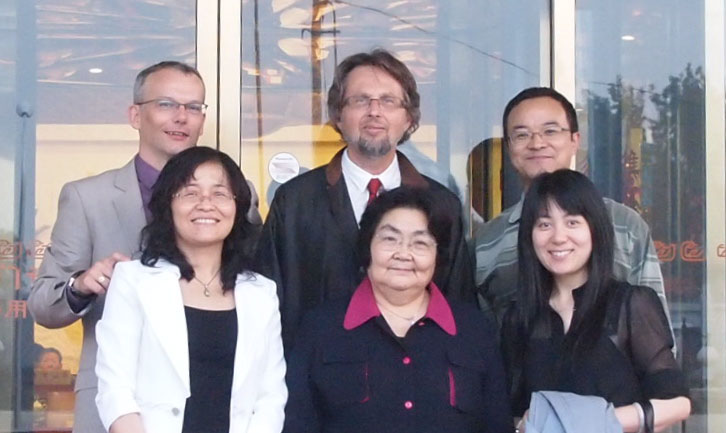 The institute is an integrated centre for teaching, research, and psychiatric services and is a WHO Collaborating Centre for research and training in mental health.  The training conference was chaired by Dr. Liu Jing and co-chaired by Dr. Wang Yufeng.  Both Liu and Wang are child and adolescent psychiatrists and researchers in Pervasive Developmental Disorders and ADHD.  In addition, the hosts provided their guests with a number of excellent translators who were junior faculty members – both PhD and MD.

A number of local clinicians and researchers shared in the conduct of the workshops for the more than 80 participants in the training program that were from all parts of China.  The participants were comprised of child and adolescent psychiatrists, general psychiatrists and pediatricians.  The program focused on practical orientation with direct impacts on patient care.

The program received resounding feedback and the Ministry of Health in China and the conference organizers have indicated a great interest and willingness to formalize the field of child and adolescent psychiatry. 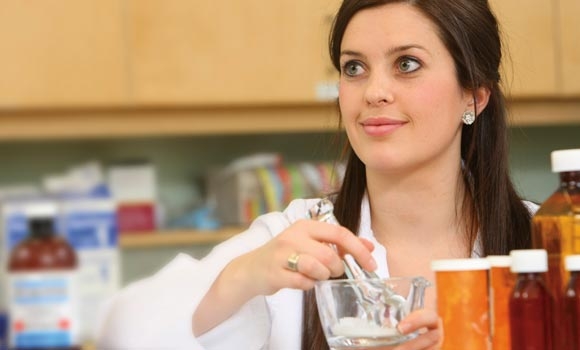 As part of a series on the graduates of 2011, Dal News profiled Pharmacy graduate Melanie Trinacty.  Click here to read more. 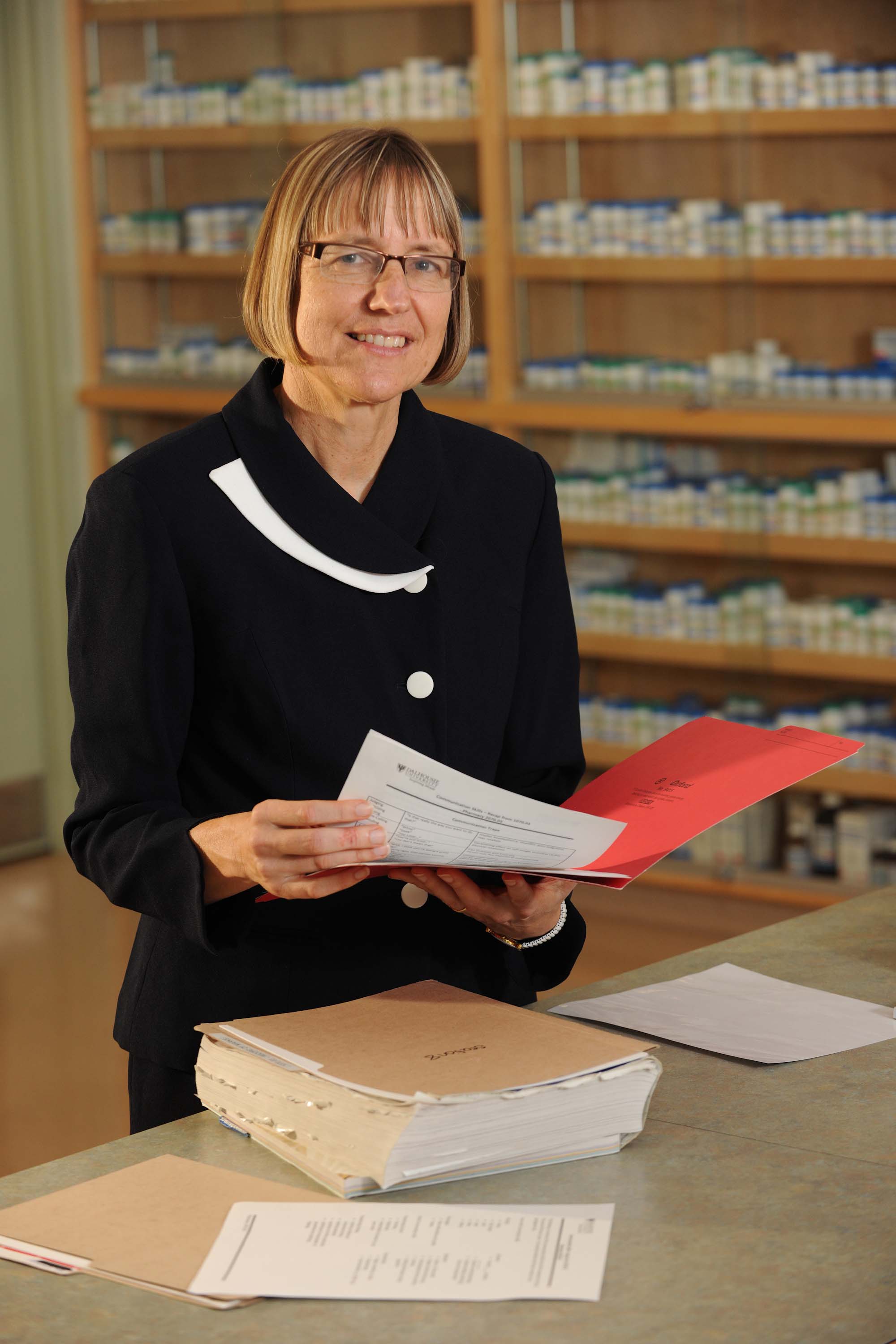 In June, Dr. Ingrid Sketris (College of Pharmacy) will complete a 10 year position as Chair in Health Services Research funded by the Canadian Health Services Research Foundation (CHSRF), the Canadian Institutes of Health Research (CIHR), and co-sponsored by the Nova Scotia Health Research Foundation (NSHRF).  Ingrid’s chair is one of 12 created across Canada, but is the only one in Atlantic Canada and the only one in pharmaceutical policy.  Through the Inititative for Medication Management, Policy Analysis, Research and Training (IMPART) which she founded in 1993 and her CHSRF/CIHR Chair, along with ongoing support from NSHRF and the College of Pharmacy, Ingrid established the Drug Use Management Policy and Residency Program that embedded its trainees in decision maker organizations (often government) to work jointly on negotiated projects.  Cheryl Doiron, who was Associate Deputy and then Deputy Minister of Health in Nova Scotia – a former member of Ingrid’s advisory board who now serves with Ingrid on the Health Council of Canada said of Ingrid:  “I never met an academic/researcher who has been more effective at forming excellent relationships at all levels: colleagues, student, administration, government, etc…She has an uncanny ability to facilitate the translation of research and knowledge into workable public policy.”  Ingrid launched her Chair report at Dalhousie on March 31, 2011 following the annual conference on the Canadian Association of Health Services and Policy Research held in Halifax (May 9-12), which she co-chaired.  On Thursday, May 12, 2011 – a motion was read in the House by the Honorable Maureen MacDonald, Minister of Health and Wellness, recognizing the contribution of Health Services Research at Dalhousie and thanking Dr. Ingrid Sketris for her committment and leadership in this area for the past 10 years.

Congratulations and thank you Ingrid from all of us on your truly outstanding accomplishments!

From top: Anne Marie Whelan, David Jakeman and Lois Jackson being presented with their awards by Dean Will Webster

At the Full Faculty meeting held on May 19, 2011, three of our faculty members were recognized with awards.

Dr. Anne Marie Whelan of the College of Pharmacy was presented with the Teaching Excellence Award.  This annual award recognizes the critical role that teaching plays in the Faculty of Health Professions and honours an outstanding teacher who embodies the finest aspects of exemplary teaching.

This year, two awards were established in recognition of outstanding research leading to significant progress in the understanding and/or management of a health related problem.  The Research Excellence Award was open to all faculty members and the Junior Research Award was open to faculty members within ten years of their initial appointment.  Dr. Lois Jackson, Acting Director of the AHPRC and Professor in the School of Health and Human Performance received the Research Excellence Award and Dr. David Jakeman, College of Pharmacy, was given the Junior Research Award.

Congratulations to all of our award winners!

Come hear from one of the authors of the bestselling book Take as Directed: Your Prescription for Safe Health Care in Canada.  Called “a sensible, honest look at the state of affairs of Canada’s health care system”  Neil MacKinnon PhD and Rhonda Church MD’s book is aimed at demystifying the Canadian health care system.  They offer a first hand “behind the curtain” look at how physicians and pharmacists think and solve problems.

Neil will weave together patient stories, sound advice and useful information. He will suggest useful strategies for patients seeking care for themselves and their families, and provide useful guidance for navigating the complexities of Canadian healthcare.

Neil MacKinnon, PhD, FCSHP, is a Professor, the Associate Director for Research at the Dalhousie University College of Pharmacy and a Dalhousie alumnus. Neil is also cross-appointed to the Faculty of Medicine and the School of Health Administration.  In 2007-08, Neil was selected as one of 13 individuals worldwide to complete a Harkness Fellowship in international health policy with the Commonwealth Fund in New York City. Neil has an active research program that focuses on improving the safety and quality of the medication-use system. Neil is the president of the Canadian Society of Hospital Pharmacists.

SAINT JOHN – This year, Jason Steeves is giving out flu shots for the first time.

Kâté Braydon/Telegraph-Journal
Jason Steeves, a pharmacist at Zellers in the Lancaster Mall, gives a flu shot to Hermel Desjardins at a clinic on Monday. A flu shot for someone who is not in a risk group costs about $20.

The pharmacist is one of 150 in the province who are now certified to administer medical injections, which he says will encourage more people to get the shot.

“It’s increasing the access to the service to the public,” said Steeves, who owns the Zellers pharmacies in the Lancaster Mall and in McAllister Place.

This is the first year pharmacists have been able to give the flu shot, after changes to the Pharmacy Act in 2008. It took time for pharmacists to develop training and certification through Dalhousie University.

Although Steeves has always held flu clinics, the shots had to be administered by groups such as the VON, in longer, infrequent clinics.

“Now, with someone on staff able to do it, we’re able to set up shorter clinics, and much more frequent,” Steeves said, adding his clinics will be by appointment because he is the only pharmacist with the training.

The province launched its seasonal flu vaccination campaign this week. This year’s shot will protect people from three strains of the flu, including the H1N1 virus that made headlines last year.

Seasonal influenza poses serious health risks to the elderly, the very young, pregnant women and those with weakened immune systems or other chronic health conditions, the Department of Health says.

The government funds flu vaccine for those high risk groups, as well as their household contacts.

The eligibility of children under 18 for the free shot is new this year, but the Department of Health recommends everyone get it.

Steeves said anyone not in a risk group who wants the shot can pay about $20 to have it done.

The ability for pharmacists to give out the shot demonstrates the changing nature of the field, Steeves said.

He said it’s not pharmacists trying to take business away from doctors, who are already flooded with people getting the flu shot this time of year.

“We’re just making it accessible to a broader scope of people.”

Paul Blanchard, executive director of the New Brunswick Pharmacists’ Association, said it makes sense to allow pharmacists to administer the shot when the goal is to ensure as many people are vaccinated as possible.

Data from the United States show more people get immunized when more health professionals are able to give out the shot, he said.

He said the whole experience will be a “learning experience” for pharmacists across the province, and there have been particular challenges training francophone pharmacists. Dalhousie University only offers English-language training, but the association is finding ways to address the issue.

“There are a shortage of northern pharmacies offering this in our first year,” Blanchard said. “We want to close that gap.”

For a full list of eligibility requirements or a list of pharmacies offering clinics, go to www.gnb.ca/flu. 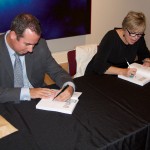 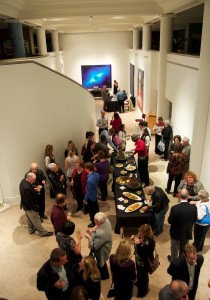 The formal launch of the new best-selling book Take As Directed, written by Pharmacy Professor Neil MacKinnon and Dalhousie Medical School Alumni Dr. Rhonda Church, was held at the Art Gallery of Nova Scotia on September 24th with 200 guests in attendance. The book, aimed at demystifying the Canadian health care system, offers common sense advice to anyone concerned about their health and well being.  Written in plain language, Take as Directed offers Canadians a “behind the curtain” look at how physicians and pharmacists think and solve problems.  To read more on this story see the article in the September 8th Dalnews. 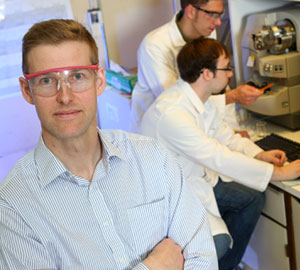 Dr. David Jakeman from the College of Pharmacy is leading a research partnership to engineer microbes to produce new molecules and study their potential in fighting bacteria and cancer.  To read more about this innovative study, see the DalNews story.