There’s a new boss in Capital Health’s board room.

Daniel O’Brien has been appointed chairman of the board of directors, the health authority said in a news release Thursday.

O’Brien has held academic and administrative positions at Dalhousie University and Saint Thomas University in Fredericton.

At Dalhousie, he was director of the School of Social Work and associate dean of the Faculty of Health Professions. He was president and vice-chancellor at Saint Thomas for 16 years.

“I look forward to working with the other volunteer members to support Capital Health as it transforms and to improve the health of our citizens,” O’Brien said.

The Dalhousie School of Social Work announces an official open house of the new space. This event will be an opportunity to profile the work of social work students and explore social justice issues.

Come and join students, faculty, staff and community members for a fun event and support the School of Social Work.

You wouldn’t necessarily think that speech therapy would make a compelling subject for a hit movie. ButThe King’s Speech—which tells the true story of King George VI’s efforts to cope with a severe stutter in the lead-up to Second World War—manages to wring great drama out of the process: fear, angst, humour, sadness and, ultimately, the sense of joy that comes from triumphing through personal adversity.

Riding a wave of critical acclaim, the film took home a Golden Globe Sunday night for best actor (Colin Firth) and is expected to be a major contender at next month’s Academy Awards. And it counts Will Webster, Dean of Dalhousie’s Faculty of Health Professions, among its admirers.

“I thought the movie was very well done,” says Dr. Webster, who has stuttered, as he puts it, “from the moment I opened my mouth” and whose research program for many years has focused on brain mechanisms associated with stuttering. Dr. Webster says he saw his own experience reflected in the film.

To read the rest of the story visit http://dalnews.dal.ca/2011/01/18/king’s.html?utm_source=dalnewsWeekly&utm_medium=email&utm_content=123&utm_campaign=dalnewsWeekly

Come hear from one of the authors of the bestselling book Take as Directed: Your Prescription for Safe Health Care in Canada.  Called “a sensible, honest look at the state of affairs of Canada’s health care system”  Neil MacKinnon PhD and Rhonda Church MD’s book is aimed at demystifying the Canadian health care system.  They offer a first hand “behind the curtain” look at how physicians and pharmacists think and solve problems.

Neil will weave together patient stories, sound advice and useful information. He will suggest useful strategies for patients seeking care for themselves and their families, and provide useful guidance for navigating the complexities of Canadian healthcare.

Neil MacKinnon, PhD, FCSHP, is a Professor, the Associate Director for Research at the Dalhousie University College of Pharmacy and a Dalhousie alumnus. Neil is also cross-appointed to the Faculty of Medicine and the School of Health Administration.  In 2007-08, Neil was selected as one of 13 individuals worldwide to complete a Harkness Fellowship in international health policy with the Commonwealth Fund in New York City. Neil has an active research program that focuses on improving the safety and quality of the medication-use system. Neil is the president of the Canadian Society of Hospital Pharmacists.

SUSAN WILSON’s patients are sexual assault victims. They come to her battered, bruised, beaten and raped.

And, disturbingly, the 130 clients —127 adults and three children — seen by Wilson, and other sexual assault nurse examiners in Halifax Regional Municipality area hospitals last year, ranged in age from three to 95.

To read the rest of the story visit http://thechronicleherald.ca/Metro/1211517.html

When he looks back, Phil Leadbeater says it was his good fortune not to have been accepted to med school.

Keen to become a doctor after working 18 years as an army medic, Mr. Leadbeater returned to high school as a mature student to catch up on the math and science credits he needed to do a science degree. But as it turns out, it was his application to Dalhousie’s School of Occupational Therapy that was successful.

“Someone at Dal said ‘yes’ to me and let me occupy one of the 36 seats and it changed my life,” says Mr. 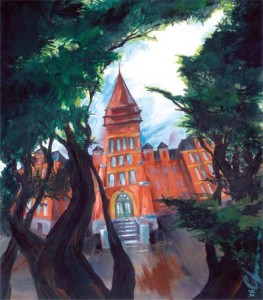 “I think we forget what it means to us. We graduate and go off in our lives and we forget where we came from.”

Recently back at Dalhousie for his 15th anniversary class reunion, Mr. Leadbeater brought with him a painting he commissioned of the Forrest Building, where he attended his occupational therapy classes. The Forrest is also the Dal home for nursing and physiotherapy students.

Titled “Journey through the Forrest,” the painting shows the historic red brick building framed by the foliage of several tall trees. It was inspired by a poem, “Enchanted Forrest,” he wrote upon graduating that recounts the student’s journey to knowledge. “We stumbled over rough terrain/ we stubbed our toes/ we skinned our knees/ yet, at times/ we managed to stop/ and smell the roses along the way.”

He arranged to have the painting made into prints. They are being sold for $10 each with the proceeds going to an admission scholarship fund. The original painting now hangs in the Forrest Building.

“I guess I wanted the alumni to get more involved and remember this place that means so much to us,” he says.

Occupational therapy, Mr. Leadbeater continues, turns out to be perfect for him, “a doer,” who enjoys working hands-on with his clients. He is also a dedicated volunteer who was awarded a medal of honour, the Order of the Hospital of St. John of Jerusalem, for his humanitarian work.

“I recall being able to work with this man, a paraplegic. We had to transfer him from his wheelchair to the bathtub. He had me by the shirt, and I had him, and I went, ‘on the count of three, let’s do this,’” says Mr. Leadbeater. “We’re looking at each other, eye-to-eye, and I’m thinking, ‘wow, I love my job.’ I love the contact with clients, being able to help them.”

SAINT JOHN – This year, Jason Steeves is giving out flu shots for the first time.

Kâté Braydon/Telegraph-Journal
Jason Steeves, a pharmacist at Zellers in the Lancaster Mall, gives a flu shot to Hermel Desjardins at a clinic on Monday. A flu shot for someone who is not in a risk group costs about $20.

The pharmacist is one of 150 in the province who are now certified to administer medical injections, which he says will encourage more people to get the shot.

“It’s increasing the access to the service to the public,” said Steeves, who owns the Zellers pharmacies in the Lancaster Mall and in McAllister Place.

This is the first year pharmacists have been able to give the flu shot, after changes to the Pharmacy Act in 2008. It took time for pharmacists to develop training and certification through Dalhousie University.

Although Steeves has always held flu clinics, the shots had to be administered by groups such as the VON, in longer, infrequent clinics.

“Now, with someone on staff able to do it, we’re able to set up shorter clinics, and much more frequent,” Steeves said, adding his clinics will be by appointment because he is the only pharmacist with the training.

The province launched its seasonal flu vaccination campaign this week. This year’s shot will protect people from three strains of the flu, including the H1N1 virus that made headlines last year.

Seasonal influenza poses serious health risks to the elderly, the very young, pregnant women and those with weakened immune systems or other chronic health conditions, the Department of Health says.

The government funds flu vaccine for those high risk groups, as well as their household contacts.

The eligibility of children under 18 for the free shot is new this year, but the Department of Health recommends everyone get it.

Steeves said anyone not in a risk group who wants the shot can pay about $20 to have it done.

The ability for pharmacists to give out the shot demonstrates the changing nature of the field, Steeves said.

He said it’s not pharmacists trying to take business away from doctors, who are already flooded with people getting the flu shot this time of year.

“We’re just making it accessible to a broader scope of people.”

Paul Blanchard, executive director of the New Brunswick Pharmacists’ Association, said it makes sense to allow pharmacists to administer the shot when the goal is to ensure as many people are vaccinated as possible.

Data from the United States show more people get immunized when more health professionals are able to give out the shot, he said.

He said the whole experience will be a “learning experience” for pharmacists across the province, and there have been particular challenges training francophone pharmacists. Dalhousie University only offers English-language training, but the association is finding ways to address the issue.

“There are a shortage of northern pharmacies offering this in our first year,” Blanchard said. “We want to close that gap.”

For a full list of eligibility requirements or a list of pharmacies offering clinics, go to www.gnb.ca/flu.

The School of Physiotherapy commends the innovative recommendations provided by Dr. John Ross in his recent report, “The Patient Journey Through Emergency Care in Nova Scotia:  A Prescription for New Medicine.” Dr. Ross is the 20-year veteran of emergency medicine who was tasked by the NDP government to examine the province’s emergency departments and make recommendations.

The report, released last Tuesday, speaks to themes that are currently taught to our physiotherapy students: collaboration, teamwork, community care, and alternative models of access to care that are found throughout the report.

Our students graduate as ‘generalists’ and have the collective assessment and treatment skills to be important members of the health care team in both emergency and primary health care settings. Emergency department patients who would be potential candidates for physiotherapy care include: individuals with chronic or acute pain due to musculoskeletal conditions; whiplash injuries; low back pain; ankle sprains; knee injuries; wrist, elbow and shoulder injuries; elderly patients with mobility or vestibular issues; and respiratory conditions. In addition to the musculoskeletal rehabilitation that physiotherapists are perhaps best known for, physiotherapists also have expertise in cardiovascular rehabilitation, stroke recovery, cancer care, diabetes care and education, obesity management in children and adults, and rehabilitation following major surgeries such as hip and knee replacements.

The physiotherapy program teaches students the skills needed to promote health promotion and wellness. Students are taught the knowledge, skills and attitudes to know that when physiotherapy is integrated into effective community care teams, seniors and individuals with chronic diseases receive the care that facilitates their ability to stay in their homes, stay independent, active and mobile, and help avoid ER visits. This is another critical component to relieving the stress on emergency departments, as found in Dr. Ross’s report.

Sandy Rennie, PT, PhD, is an Associate Professor and Director of Dalhousie’s School of Physiotherapy, Faculty of Health Professions.

LINK: The Patient Journey Through Emergency Care in Nova Scotia:  A Prescription for New Medicine.