During tumorigenesis, cancer cells undergo dramatic changes including changes in chromosome number, changes in cell shape and size and the loss of normal cell cycle control. These changes are driven by mutations arising from genomic instability. Mutations in genes that play roles in the detection, signaling or repair of DNA damage contribute significantly to genome instability and increase cancer susceptibility. Therefore, key to developing a cure for cancer is the understanding of how cells prevent genome instability and cancer through the efficient detection and repair of DNA. The Dellaire lab employs biochemical and molecular biology approaches combined with light and electron microscopy to explore the relationship between the organisation of the mammalian nucleus and the function of the various subnuclear domains in the maintenance of genomic integrity. In particular, we study how structural and biochemical changes in chromatin and the nuclear domain known as the promyelocytic leukemia nuclear body (PML NB) contribute to the cellular response to DNA damage.
Current areas of research include:

To efficiently repair DNA lesions within chromatin the cell has evolved a number of recently elucidated mechanism for marking chromatin for remodeling and/or post-translational modification to allow access to DNA repair machinery. For example, after the induction of a DNA double-strand break (DSB), chromatin is modified by phosphorylation of the histone variant H2A.X on S139 by the PI-3 kinase family members, ataxia telangiectasia mutated (ATM), ATM and RAD3-related (ATR) and DNA-dependent protein kinase (DNA-PK) (Rogakou et al., 1999; Burma et al., 2001; Stiff et al., 2004). Phosphorylated H2A.X is also referred to as gamma-H2A.X (g-H2AX). The accumulation of g-H2AX at DNA breaks leads to the recruitment of chromatin modifiers such as the acetyl-transferase complex Tip60/NuA4, which acetylates the core histones H3 and H4, and the chromatin remodelling complexes Ino80 and Swr1 (reviewed in Wurtele and Verreault, 2006). Together these complexes may contribute to the decondensation of chromatin that is observed at the site of DNA breaks in mammalian cells (Kruhlak et al., 2006). Global decondensation of chromatin has also been reported in response to DNA DSBs and is dependent on the phosphorylation of the transcriptional corepressor Kap1 by ATM kinase (Ziv et al., 2006).

Currently, few studies have addressed how structural changes in chromatin within intact cells is related to DNA damage-induced epigenetic modification of the core histones. Of the studies that have tried to address chromatin changes in situ, the majority have relied on light microscopy, which lacks the necessary resolution to define true structural change in the chromatin fibre from changes in DNA packing or density (Deghani et al., 2005).

Outside of the chromosomes a number of distinct nuclear domains or “bodies” exist – The functions of many of the nuclear domains is complex and only partially elucidated (Lamond and Earnshaw, 1998). These subnuclear domains include compartments involved in pre-mRNA splicing (splicing speckle domains), ribosome biogenesis (nucleolus), histone gene expression and snRNP formation (Cajal bodies), and tumour suppression (the promyelocytic leukaemia nuclear body (PML NB))(Dellaire and Bazett-Jones, 2004; Handwerger and Gall, 2006). 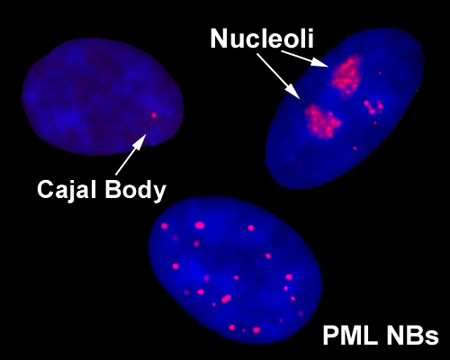 Changes in the biochemical composition, dynamics and/or structure of these compartments often follows exposure to cell stress such as DNA damage and in various cellular pathologies, including viral infection, cell senescence, and oncogenic transformation (Zimber et al., 2004; Dellaire and Bazett-Jones, 2004) . For example, the nucleolus (Rubbi and Milner, 2003a), Cajal bodies (Cioce et al., 2006), and PML NBs (Dellaire et al., 2006) are altered dramatically in protein composition and structure after DNA damage. However, the mechanisms responsible for DNA damage-dependent changes in nuclear structure and how such changes affect nuclear functions including DNA repair, have only begun to be addressed.

PML NBs are perhaps the most functionally complex of the known subnuclear compartments – This is due to their association with factors involved in apoptosis, gene regulation, viral infection, cellular senescence and DNA repair, all of which contribute to the proposed tumour suppressor function of this domain (Maul, 1998; Zhong et al., 2000; Salomoni and Pandolfi, 2002; Bernardi and Pandolfi, 2003; Dellaire and Bazett-Jones, 2004). The main structural component of the PML NB is the PML protein, which is found concentrated in 10-30 bodies of 0.3-1.0 micron in diameter (Borden et al., 2002; Dellaire and Bazett-Jones, 2004). PML NBs make extensive contact with chromatin at their periphery (Boisvert et al., 2000) and their dynamics and structural integrity are intimately linked to that of chromatin (Eskiw et al., 2003 and 2004), leading to the suggestion that these bodies may play a role in chromatin transactions such as transcription, replication and repair of DNA (Dellaire and Bazett-Jones, 2004; Ching et al., 2005). 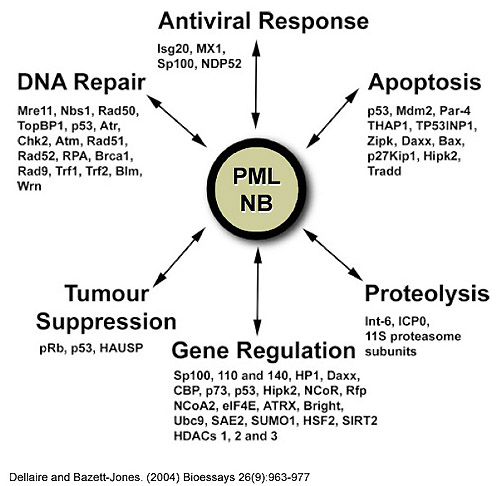 The PML gene and PML NBs in tumour suppression – The PML gene was first identified as the fusion partner of the retinoic acid receptor alpha (RAR-a) gene at the break point of a common chromosomal translocation found in the in the promyelocytes of patients suffering from acute promyelocytic leukaemia (APL) (Melnick and Licht, 1999). The resulting PML-RAR-a fusion protein causes the disruption of PML NBs as well as aberrant cell proliferation, gene expression and apoptosis. Reduced PML expression has also been found in tumours from diverse histological origin, including breast, colon, lung and prostate tissue (Gurrieri et al., 2004). In addition, PML has been linked to the regulation of several major tumour suppressor pathways affecting cancer in these tissues, including p53 (Pearson et al., 2000), Chk2 (Yang et al., 2002), TGF-beta (Lin et al., 2004), PTEN/Akt (Trotman et al., 2006), and casein kinase II (CK2)(Scaglioni et al., 2006), further supporting a role of PML in tumour suppression. In particular, PML NBs may play an important role in regulating p53 activation following DNA damage by providing sites for the co-accumulation of p53 with CBP and HIPK2, which activate p53 through acetylation and phosphorylation, respectively (D’Orazi et al.,2002 and Hofmann et al., 2002).

PML nuclear bodies are DNA damage sensors – PML NBs are disrupted and their number appears to increase in response to DNA damage induced by a variety of methods including UV- (Kurki et al., 2003) and ionising radiation (Carbone et al., 2002). However, the mechanism for this disruption had not been elucidated nor was it known if this process was regulated. If PML NBs are indeed DNA damage sensors, one would expect that their response would be both dose-dependent and regulated by DNA damage signaling pathways. We discovered that PML NBs do respond in a dose-dependent fashion to low, physiological levels of DNA damage produced by ionizing radiation and chemotherapy treatments by increasing in number through a fission mechanism from pre-existing bodies (Dellaire et al., 2006). Furthermore, this increase in PML NB number was regulated by NBS1, a component of the MRN DNA damage sensor, as well as ATM, Chk2 and ATR kinase (Dellaire et al., 2006), which together constitute parallel and partially redundant signaling pathways for the detection and repair of DNA damage (Shiloh et al., 2003; Kurz and Lees-Miller, 2004). Furthermore, inhibition of both ATM and ATR by caffeine had the most profound affect on PML NB number in response to DNA DSBs, suggesting these kinases can act in an additive fashion to regulate PML NB number.

It is unclear what role PML NB number may play in DNA damage signaling. We hypothesise that an increase in PML NB number represents an increased “state of subdivision” of PML-containing complexes (see below), resulting in an increase in surface area for the interaction of p53 with proteins that post-translationally modify and activate this tumour suppressor (e.g. CBP and HIPK2). PML NB number and biochemical composition may also provide a novel means of monitoring the efficacy of radiation and chemotherapy by providing a simple means of evaluating the integrity of DNA repair pathways. In future our laboratory will continue to explore the role of PML NBs in DNA repair and tumour suppression.