“WE Travel was something that several of my friends had experienced and described it as life changing. I decided to make a commitment to go and invited my 29-year-old daughter to join me. We had no idea that we were in for an adventure of a lifetime.” 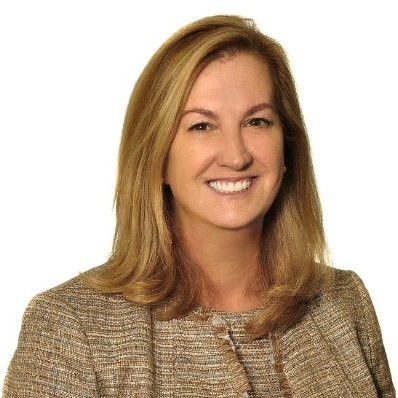 WE Charity, formerly known as Free The Children, is an international development charity and youth empowerment movement founded in 1995 by human rights advocates Marc and Craig Kielburger.

WE is a movement that believes when we come together we can create an even better world. WE makes it easy for everyone to get involved, whether at home, school or work, by offering resources to help create positive social change in your community and around the world.

I first became aware of WE when BMO Hosted for some of the guest speakers for WE Day in Toronto.   WE Day events host tens of thousands of students in various stadiums across the country and celebrate the impact they have made on local and global issues. WE focuses on 4 pillars:  education, health, clean water and nutrition (Agriculture).  These are all community lead programs with the elders in the communities.

WE Travel was something that several of my friends had experienced and described it as life changing. I decided to make a commitment to go and invited my 29-year-old daughter to join me. We had no idea that we were in for an adventure of a lifetime.

I’ve always been a supporter of lifelong learning and additionally education for women.  I was looking forward to seeing what WE had developed in tandem with the community elders  as they face challenges with traditional female education.  Families are still required to pay for textbooks and uniforms for their children and often the distance to school exceeds several miles which makes access challenging. Additionally, when parents allow their children go to school they cannot contribute to the family’s income. Girls are expected to marry young and join their husband’s families with little opportunity to broaden their education.

“I’ve always been a supporter of lifelong learning and additionally education for women.  I was looking forward to seeing what WE had developed in tandem with the community elders  as they face challenges with traditional female education.” 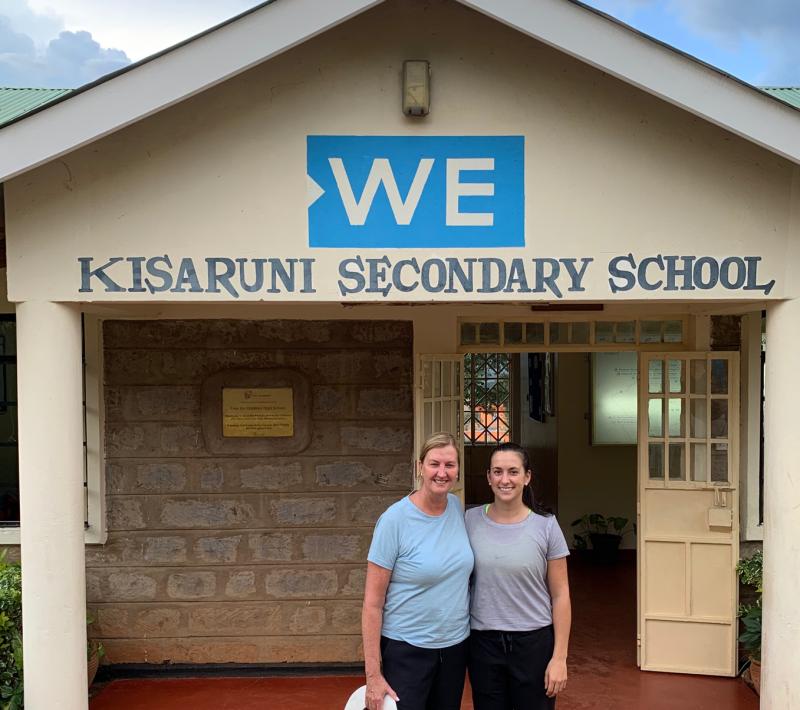 A few days into our trip we visited the girls at the Kisaruni Girls School.  We were greeted by confident, articulate and poised women who took us by the hand and guided us to our seats where we sat side by side each one invading our personal space as they were so curious to have us answer their questions.  They asked me how I chose my daughter’s path of study and they were surprised that she had done so herself. They knew that our Prime Minister was Justin Trudeau as his mother Margaret attended the opening of the WE College in July 2019.  They knew that Canada has two official languages and were curious to know if other languages were spoken.

They expressed their desire to study tourism, engineering, and science.  In addition to their parents choosing their study and career path, standardized testing is delivered on an annual basis. They only have once chance to perform well and gain entry into one of the few colleges in the Maasai Mara which gives young Maasai and Kipsigis women, and soon men, the chance to complete their education.

The girls live at the school given that the country is vast, and communities are often far from the school. You can immediately see how supportive the girls are of each other, wanting each other to be successful. They exude strength as a group and that success is defined as success of all students. The saying “It takes a village” has never been more evident.  If anyone is struggling, they encircle that individual and find a way to support, teach, help the girl in need.  It is a communal success that are striving for, not competitive and individual successes.

They told a story of one of the girls not returning to the school after a visit home and were concerned that her parents would have her married.  They, along with the school representatives, were able to visit with her parents and have them better understand the benefit of education and how it could inherently benefit the family and their community.

While I have always valued both academic and experiential education it has never been so apparent to me that access to quality education is a fundamental key to a progressive society.  The barriers to access that the girls in Africa have experienced appeared to be historically insurmountable however with assistance with a ”hand up” rather than a “hand out” the WE organization has been able to reach children that otherwise would not have received foundational skills.  This experience made me think about the Canadian education system and all of the partners that are required to overcome barriers to access in Canada.  These barriers may often be financial however basic programs such as breakfast programs, computer and technology equipment and special funding for extracurricular activities are integral to a successful holistic education. I am very grateful for a Canadian education system, even with barriers, continues to support education for each and every child.

While I have always valued both academic and experiential education it has never been so apparent to me that access to quality education is a fundamental key to a progressive society.

“More than one hundred years after the publication of her first book in 1896, Mary P. Follett (1868–1933) remains one of our preeminent thinkers about democracy and social organization. Without the benefit of modern research methods, Follett developed such original, penetrating analyses of leadership, power and authority, conflict, and group behavior that her ideas form the basis of much of our modern discourse about organizations and management.” 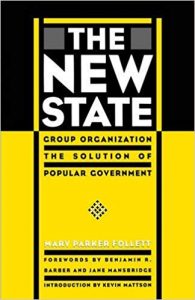 The New State by Mary Parker Follett is not an easy read.  The concepts presented within the pages of a book published 100 years ago, continues to inspire us to think deeply and consider individual responsibility within a group dynamic.

Mary Parker Follett’s greatest gift was her ability to listen intently to everyone, irrespective of their “position” in society – factory workers, shop girls, or presidents of large corporations.  She believed that every voice counted – and it was not lip service. She was above all a determined pragmatist with a philosophy that we can organize our lives and institutions so that everyone can contribute.  While we may consider this rather optimistic, I have seen glimpses of this possibility.  We live in a world that thrives on complexity, but I believe that resilience comes when individuals participate in a greater, more inclusive, conversation.

As we prepare to welcome a New Year, the last word belongs to a woman who passionately believed in the reality of integrating the diversity of cultures for the greater good. Mary Parker Follett valued differences, maintaining that together we gain strength and renewal, as individuals, as groups, as a society.

I have enjoyed reading “The New State” by Mary Parker Follett. I find I must take time to reflect on the ideas brought forth. One phrase stands out for me “There is a need for competent leaders and a need for competent group members”.  We are seeing more research and novels focusing on the need for “followers”; emphasis being that we cannot all be leaders and that someone must effectively do the work.  This is directly related to the obligation as a member to take that position seriously and contribute to the success of the team; not just the leader, but the entire team.  I am seeing similar views on the extrovert versus introvert position.  Could there be something to more Eastern cultures who favour “introversion” and team member contribution?  Unbelievably, this question of requiring both types to make an efficient team and society was put to paper 100 years ago by Mary Parker Follett!  Maybe it is about time we looked at all types to create a more balanced society.

It is fascinating in business to see the emergence of “Agile” implementation framed as a new concept for organizing structures. Or in change management the idea of “listening posts” or “Ask Me Anything” sessions… This discussion and highlighting key aspects of the work from such a prominent thinker as Mary Parker Follett through the practical today’s language of Dr. McLarney truly demonstrates to me how long it takes for societal change to truly evolve. Thank you for sharing! 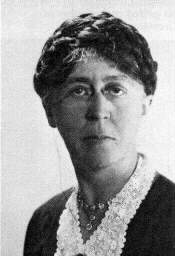 “The most successful leader of all is the one who sees another picture not yet actualized. He sees the things which are not yet there… Above all, he should make his co-workers see that it is not his purpose which is to be achieved, but a common purpose, born of the desires and the activities of the group.”