“It was an amazing morning!”

“I feel like I was doing something positive and helping to give back to our environment. Planting trees is such a good thing to do.” 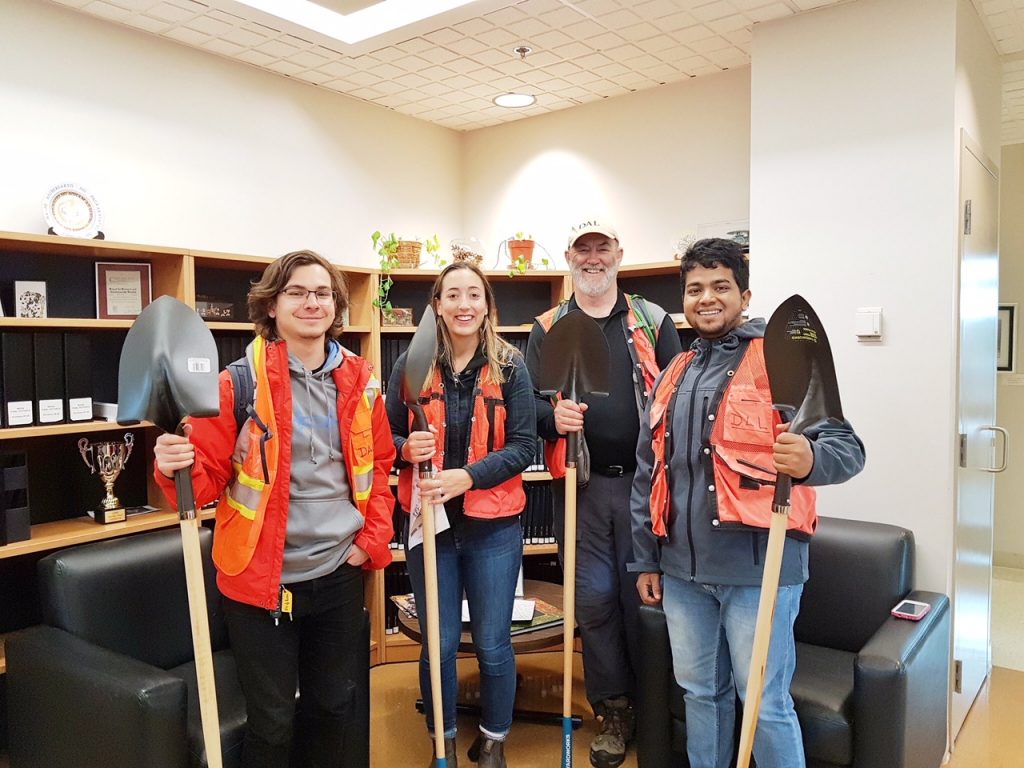 Peter Duinker and the DAL200Trees team

On June 9, 2018, led by urban forest researcher Peter Duinker and the DAL200Trees team, 200 trees were planted across the Studley and Sexton campuses to celebrate DAL’s 200th anniversary and the beginning of the University’s third century.  Special thanks to Mike Wilkinson and his Environmental Services team for preparing the selected sites in advance of the tree plant. Students for generations to come will be able to take advantage of these “learning groves.”  They are active learning environments where classes can learn to identify native species and observe associations between them. 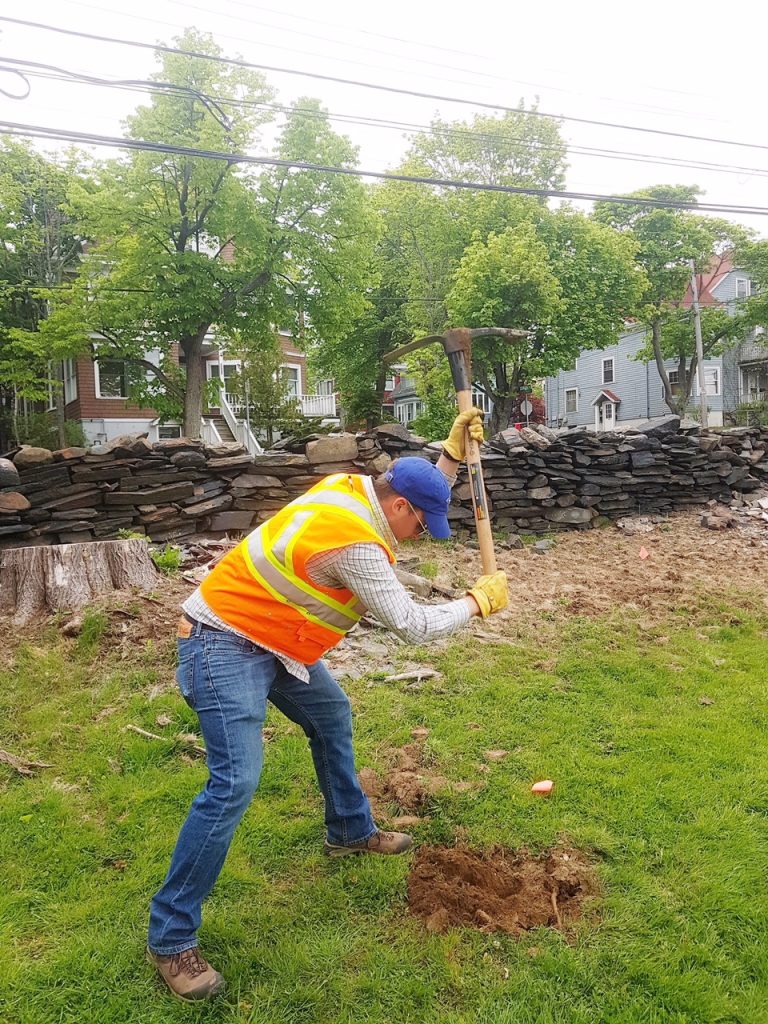 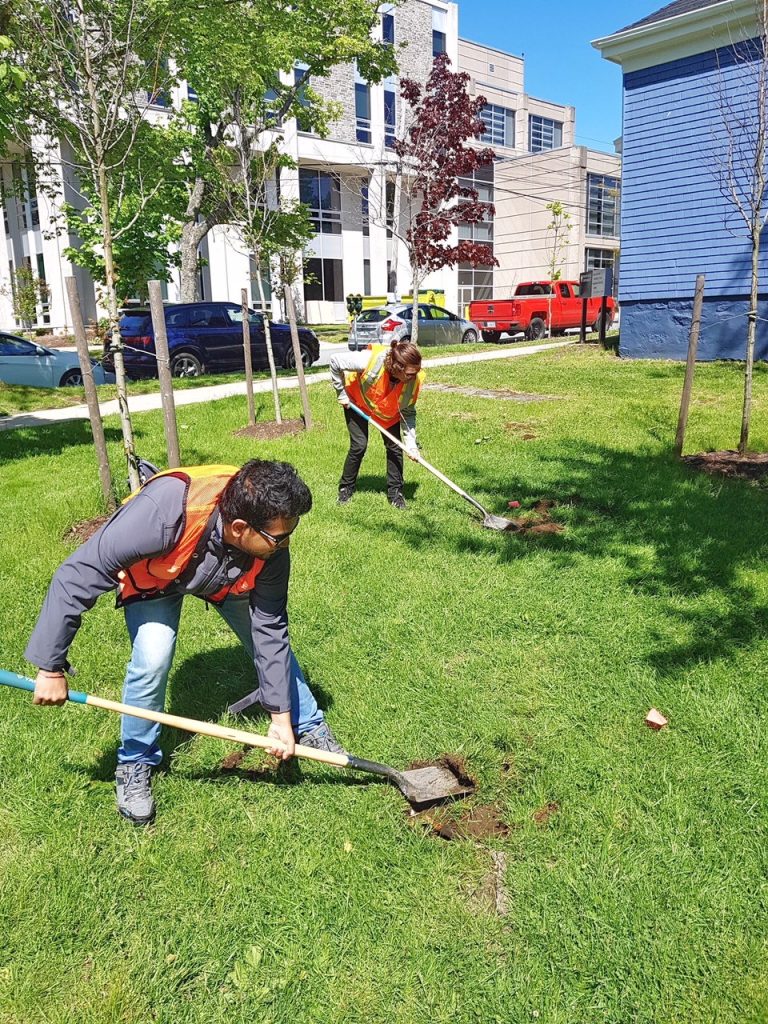 On June 9, 2018, 200 trees will be planted across the Studley and Sexton campuses to celebrate Dal’s 200th anniversary and the beginning of the University’s third century.  Volunteers are welcome!  If you are in the neighbourhood, please stop by and join the festivities.

In December 2017, students Racheal Cadman, Sara Solaimani, and Nameeta Sharma presented “A Class Project on the 200 in 200 Dal Tree-Plant Project” as part of the Peter Duinker’s class on Sustainable Urban Forests.   The project brought form and practical detail to a concept initiated by Dr. Duinker during the University’s search for project ideas to be included in the celebrations of the 200th anniversary. Now the project is becoming a reality, led by Dr Duinker, a professor in the School for Resource and Environmental Studies of the Faculty of Management, in partnership with Facilities Management and the Office of Sustainability.

200-in-200 Dal Tree-Plant Project will establish “learning groves” that will allow students, now and in decades to come, to engage in active learning focused on native tree species.  For that reason, tree selection, association, and location were critical as outlined in the following excerpt taken from A Class Project on the 200-in-200 Dal Tree-Plant Project by Racheal Cadman, Sara Solaimani, Nameeta Sharma (December 2017)

Native species were preferred because they provide an opportunity for students to learn about Nova Scotia ecosystems, and because native species provide a first step towards restoring some ecological heritage on Dalhousie campus. Over the years, campus grounds managers and city planners have favoured ornamental or non-native tree species. This tree plant provides an opportunity to start restoring the natural Nova Scotian ecosystem.

One grove was designed to be a Carolinian grove and contains multiple species native to the Carolinian forest. The Carolinian forest is located in southern Ontario, and is an area dominated by broad-leaf trees (Government of Canada, 2014). This area of Canada is warmer elsewhere in the country, and therefore several tree species grow there that are usually only found further south, such as tulip trees, cucumber trees and sassafrass (Government of Canada, 2014). There is reason to believe, because of these species’ affinity for warmer temperatures, that they may thrive in Nova Scotia as the climate changes in the coming decades (Peter Duinker, personal communication). A Carolinian grove may therefore help to maintain a more resilient canopy on the Dalhousie campus, and provide an additional learning site.

The plan does not consider planting any invasive species, particularly Norway maple. Several native species, such as Ash, are not included in large numbers because they are particularly susceptible to diseases or pests, as Ash is susceptible to the Emerald Ash Borer. American beech, which is affected by beech bark disease, has been replaced by its non-native relative, European beech. While this species is not native to Nova Scotia, it is resistant to beech bark disease and can replace the native species as it dies off. Finally, no fruit trees are included in this plan. It was determined that fruit trees should be avoided to eliminate the need for associated maintenance and clean-ups.

Designing the composition of each grove required an understanding of the associations between tree species. A total of 16 groves have been designed based on that research. In general, groves were designed by first choosing a focal native species from the tree list. The grove was designed around the focal species based on its known associations. When no specific or strong associations were known, tree species were grouped with other species with similar loose associations such as preferred growing conditions.

Many of the groves were explicitly designed based on environmental conditions and tree habitat preferences. For example, for sites with established canopy cover, shade-tolerant species are preferred, such as Sugar maple, Balsam fir or European Beech. In sites that are known to have moist soil, tree species that flourish in water are preferred, such as Red maple, White ash, or Balsam fir. It is recommended to plant more than the 200 trees needed, as some mortality is anticipated.

Learning grove sites were selected in a series of walkabouts to find appropriate locations…Notable features are included for certain sites, such as habitat conditions, or area size. The locations were selected based on a few criteria:

Sites were also reviewed on a walkabout with Dalhousie Environmental Services Manager, Mike Wilkinson, who was able to confirm which sites would be available and suggest some additional places for groves. A total of 22 places were identified as possible sites for learning groves.

The DAL 200th Anniversary Tree Plant that will take place on June 9, 2018 is an excellent example of experiential learning.  December 2017, three students, Racheal Cadman, Sara Solaimani, Nameeta Sharma came together to create a remarkable legacy to celebrate Dalhousie University’s 200th anniversary. Their presentation of “A Class Project on the 200 in 200 Dal Tree-Plant Project” was prepared as part of the Peter Duinker Class on Sustainable Urban Forest.

The following excerpt is taken from A Class Project on the 200-in-200 Dal Tree-Plant Project By Racheal Cadman, Sara Solaimani, Nameeta Sharma (December 2017) Prepared as part of Peter Duinker Class on Sustainable Urban Forests

The Dalhousie 200 Anniversary Tree Plant is an opportunity to turn the campus into a living classroom. Two distinct opportunities arise to promote environmental education and the urban forest. The first is during the tree plant itself, when students and community members will be involved in expanding the urban forest; the second is the creation of “Learning Groves” where students will be able to observe the benefits of the urban forest in action.

The day of the tree plant should be considered a chance to teach volunteers about proper tree care and foster stewardship practices towards the urban forest. Hands-on, experiential education is demonstrably more successful in increasing environmental literacy when compared with classroom studying (Jose, Patrick & Moseley, 2017). It is therefore suggested that the planting team adopt an attitude of “campus as classroom” for the duration of this event.

Volunteer team leaders will be largely responsible for encouraging experiential learning. The leaders will be knowledgeable about the urban forest, tree planting and tree identification. During the tree plant, leaders can teach volunteers about the value of the urban forest and answer questions. The Halifax Urban Forest Master Plan (HUFMP) identified the fact that many neighbourhoods in Halifax Regional Municipality have a lack of privately owned trees, and that education and outreach would be necessary to increase canopy cover (HUFMP, 2012). This tree plant provides an excellent opportunity for Dalhousie to teach volunteers specific skills such as how to plant a tree, how to care for a tree, and how to find native species. Volunteers can bring this information back to their homes and neighbourhoods to maximize care for private trees.

The other major opportunity for education is the capacity of these planted spaces to become “learning groves” for future generations of students. The aim of this planting is to create groves that are as close as possible to natural occurring groups of trees. The groves will be highly accessible, so that classes of interested students in the Biology, Sustainability and Resource and Environmental Studies departments could visit the groves as active learning environments to identify native species and observe associations between species.

Less environmentally-motivated students would still have access to these spaces; they will walk through the groves on their way to class and sit under them during warm weather. Thus, the learning groves will help to foster a “sense of place” for those who live and work at Dalhousie. Some of the values of urban trees, such as shade provision, aesthetics, and increased opportunities for recreation will be abundant on campus and will promote an appreciation for the urban forest.

This is the second post that features the DAL200 project that will see 200 trees planted around campus.   This project is championed by urban forest researcher Peter Duinker and his students, in partnership with HRM, Facilities Management, and the Office of Sustainability. 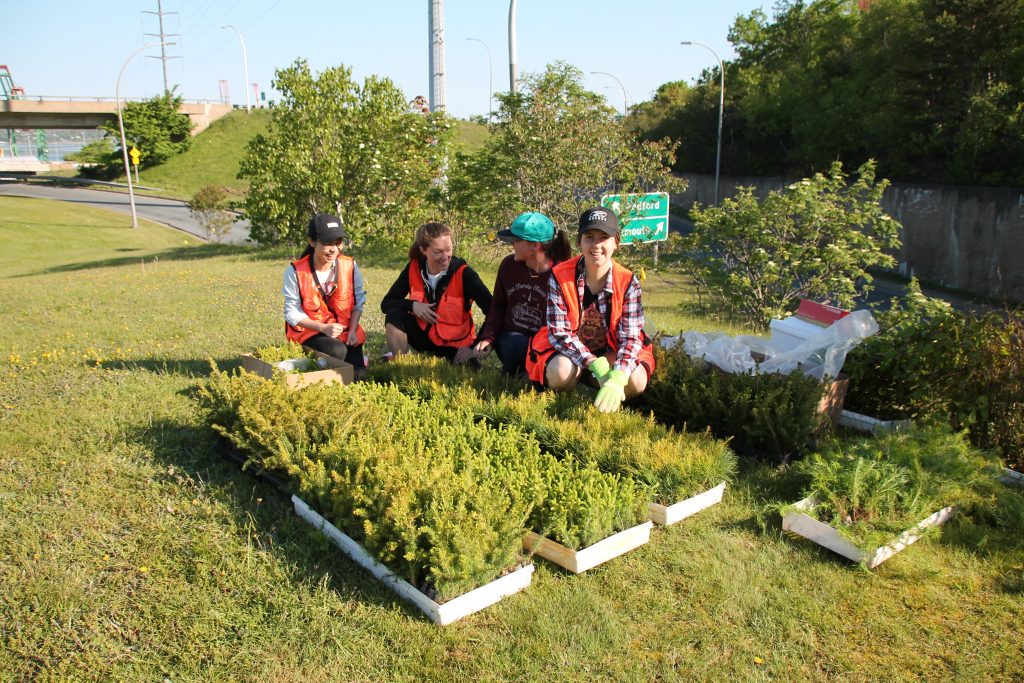 Mark your calendars – the DAL 200th Anniversary Tree Plant will take place on June 9, 2018.  Volunteers are welcome to join the celebration. Led by urban forest researcher Dr. Peter Duinker, the DAL 200 Tree Plant project will see 200 trees planted around campus in partnership with HRM, Facilities Management, and the Office of Sustainability.

December 2017, three students, Racheal Cadman, Sara Solaimani, Nameeta Sharma came together to create a remarkable legacy to celebrate Dalhousie University’s 200th anniversary. Their presentation of “A Class Project on the 200 in 200 Dal Tree-Plant Project” was prepared as part of the Peter Duinker Class on Sustainable Urban Forest.

CFAME Connection reached out to Dr. Peter Duinker, Professor and Acting Director, School for Resource and Environmental Studies, Faculty of Management, to uncover the back story of this innovative idea.  What came back was a professional, detailed and carefully organized proposal designed to encourage community engagement in sustainable living. 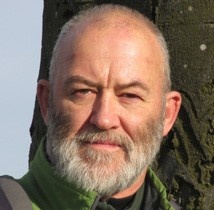 CFAME Connection is pleased to advise that Dr. Duinker and the three students, Racheal Cadman, Sara Solaimani, Nameeta Sharma, have graciously agreed to share their project in a series of posts leading up to June 9, 2018 event.  The following is an excerpt from the Student proposal:

In 2018, Dalhousie University will celebrate its 200th anniversary. The school has made a number of celebratory plans that will take place over the course of the year. To participate in the celebrations, the Faculty of Management will lead a day-long tree planting event on campus. A preparatory plan for that event is outlined here.

The stands will consist almost exclusively of tree species native to Nova Scotia, with one exceptional stand native to the Carolinian forest. These species were carefully selected and combined into groves that reflect the composition of forest stands growing naturally in Nova Scotia. This will not only increase canopy cover and beautify the campus for future generations, but will also be educational spaces, where students, faculty and employees of Dalhousie can learn about native tree species and experience natural forest growth. The tree stands are therefore called “learning groves”, to reflect their intended educative purpose. 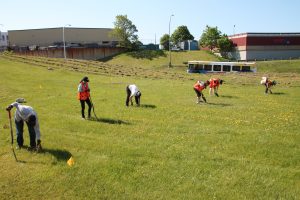 This post is the first in a series that will feature the DAL200 project that will see 200 trees planted around campus.   This project is championed by urban forest researcher Peter Duinker and his students, in partnership with HRM, Facilities Management, and the Office of Sustainability.