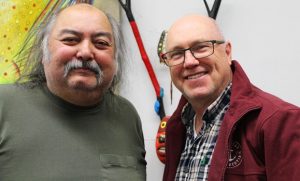 Convocation ceremonies at Dalhousie will soon look a little different thanks to a new ceremonial object that will replace the university mace currently used at the annual milestone event.

While the object won’t be unveiled until its completion in the spring of 2019, lead artists Mark Austin and Alan Syliboy have been busy working with a team of artists across Nova Scotia to craft a compelling new symbol for the university.

Austin says replacing the mace with a new ceremonial object represents an opportunity to identify a symbol that reflects the current diversity of the Dal community and its values, while still paying tribute to the university’s history and heritage.

“There is a purpose in this whole endeavour, which is to express a greater sense of belonging,” says Austin, a community and economic development professional with a background as an artist and filmmaker. Austin has roots in Cumberland County and grew up in various places as part of a military family, returning to Nova Scotia in 1989.

A collaborative effort
A Mace Re-Visioning committee was established in 2016, led by Peter Dykhuis, director and curator of the Dalhousie Art Gallery. The committee received proposals from various artists.

Austin and Syliboy, who have worked together for years, teamed up to put a proposal together.

An award-winning Mi’kmaq artist from Millbrook First Nation whose paintings and other works have earned him recognition across Canada and abroad, Syliboy is no stranger to collaboration. A limited-edition (25,000) gold coin for the Canadian Mint in 1999 sold out, while his animation and illustrations have been used in books and even as part of the Vancouver 2010 Olympics.

His culturally-rooted artistic works, which incorporate elements of Mi’kmaq petroglyphs in Nova Scotia and deal with themes of family, struggle, and strength, have been shown alongside the likes of surrealist great Salvador Dali.

“Kudos to Dalhousie for embracing a future with a more accurate recognition of the past,” says Syliboy.

Austin says the process itself is key to creating an object that authentically reflects the diversity of the Dal community.

That’s why he and Syliboy have teamed up with artists from Mi’kmaq, African Nova Scotian and other communities from across Nova Scotia to contribute to the object.

By bringing in artists from the Mi’kmaq or African Nova Scotian communities, for instance, the object recognizes that Dalhousie exists in a geographic place of cultural significance — one that has not always been as openly acknowledged and celebrated as it is today — and has become an institution of diverse peoples and ideas.

Developing a community symbol
A separate design committee at the university provided input into the development of the object but left the detailed creative decisions to the artists.

“They left space for us to say, ‘I think a symbol that would work best here is this’, for instance,” says Austin, who’s diverse career has included teaching aesthetics and consulting on community and economic development issues.

Austin, whose work has taken him into communities across Nova Scotia, says the collaborative approach has ensured that the object being created conveys authentic community.

The artists say the choices of materials and techniques used in the creation of the new object endeavour to embody Dalhousie as a place within a place. That means Nova Scotian materials, including existing re-purposed elements, are being used when possible.

“Hopefully everybody can find something that says, ‘oh yeah, that represents me,’” says Austin. “The whole thing is meant to express achievement and belonging.”

The power of symbols
Dal’s decision to call for a redesign of the mace arose as part of the university’s strategic initiative on diversity and inclusiveness, a key pillar of Dal’s broader institutional Strategic Direction.

“We know how important symbols are to ensuring people of all backgrounds feel represented, and it’s incredibly exciting to see this new ceremonial object emerge in such an inclusive and collaborative fashion,” says Dykhuis, the committee lead. “This project signifies another important step in our efforts to build an even more inclusive, diverse and respectful campus community at Dal.”

Austin says their aspiration for the ceremonial object is that it inspire the Dal community.

“The goal is that it looks elegant and from a distance has some kind of gravitas to it,” says Austin “And then the more you look at it and the closer you are, you realize there are layers of story and identity forming the whole, just like Dalhousie.”

Dalhousie’s new ceremonial object was unveiled at the first Spring Convocation ceremony held on Friday, May 10 at the Agricultural Campus.