Archives for Most Impactful General or Special Interest Society 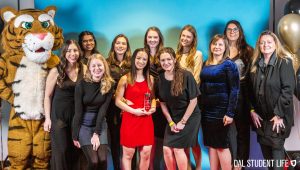 This week, we are celebrating the accomplishments of a student society from the Rowe School of Business that has just been named Dalhousie’s Most Impactful General or Special Interest Society, receiving their award at the Dalhousie Impact Awards last Thursday. Since its inception in 2015, the Rowe Women in Business Association (WIBA) has grown its membership and strengthened its programming and initiatives by leaps and bounds. It empowers women to be leaders in the workforce by providing networking events, leadership skill development opportunities, workshops, and an annual conference.

The dedication and commitment of the society’s executive resulted in a series of successful events this academic year that included social activities, charitable fundraisers, student outreach and support, networking with community partners and employer stakeholders, and collaborative initiatives with other societies. Without a doubt 2018/2019 has been WIBA’s most ambitious and most successful year to date.

To get some insider knowledge on WIBA and what it took to earn this award, we caught up with the President of the society, Rosalyn Huynh. Rosalyn is a 4th year BComm student majoring in Accounting and has been involved in WIBA for her entire undergraduate degree. She has thoroughly enjoyed her time with WIBA, especially this year as she fulfilled the role of President.

Rosalyn has been thrilled with how much the association has grown and improved during her tenure. In her words, “This year I really focused on teamwork and empowering individuals to take ownership of their roles. Additionally, we tried to increase General Membership participation through volunteer positions, and I think this will continue to grow next year. Finally, we have two new faculty advisors this year, and with their guidance, the new Executive Team will be able to accomplish even more.”

As successful as this year has been for Rosalyn and her team, it certainly hasn’t come without its challenges.

“I think as a young association there is the freedom of making the organization what you want it to be, but it was also a challenge because you are paving the way, which means creating new processes, establishing relationships, and seeking feedback. I am proud of what we’ve accomplished throughout my four years on WIBA, and I think the next step is to establish an alumni association. Paige Powell, our incoming President has been on the association for three years, and I am 100% confident in her abilities to move the association forward with our current and new initiatives.”

The 2018/2019 academic year has certainly been a busy one for the Women in Business Association. Since the start of the school year, the Dalhousie Commerce Society’s umbrella society has led numerous events and initiatives, including:

And of course, the shining achievement, their annual conference, which was held on Jan. 18-19 on campus. The event attracted over 100 delegates, which represents a 69% increase over 2018 and enabled them to generate enough revenue to help fund next year’s conference. Students from other universities including Acadia University, Saint Mary’s University, Cape Breton University, and University of British Columbia were in attendance.

For students looking to get more involved, Rosalyn believes the WIBA is the perfect place to start, having shared the following:

“I would encourage students to join WIBA because it is a strongly led organization that runs events applicable to all business students. We have great connections to the community, and our events are well-run and consistent. It is an easy step to be a General Member and can open doors for you. For example, I gained my first co-op through a connection I made when I was a General Member in first year. Students can expect to learn skills from workshops, gain connections, and have a network of students who are ambitious and eager to make an impact.”

As a society, Rowe WIBA has worked hard to embody the values of our Faculty (integrity, inclusion, collaboration, experience, and sustainability) and helped to create a better student experience here at Dalhousie.

“WIBA aims to empower leadership in young women by offering relevant events and opportunities to collaborate with ambitious leaders. Our organization is actually open to members of all genders, and we recently co-hosted an event with the Dalhousie Investment Society.”

There is no doubt that the student leaders in charge of WIBA this year will become the alumni, professionals, and community members that we will be proud of for years to come. Congratulations to WIBA on winning the Most Impactful General or Special Interest Society Award. If you’re curious to learn more, or want to get involved, we encourage you to visit their Facebook page.