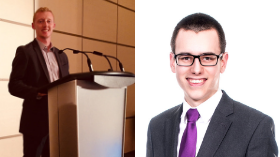 Shawn Smith from CPA Atlantic School of Business is on-campus this Thursday to meet and help students learn the path to the CPA designation. Shawn currently holds the position of Program Advisor with CPA Atlantic School of Business, serving Nova Scotia and Bermuda.  Shawn holds a Bachelor of Commerce Degree and Certificate in Human Resource Management, and Shawn has held numerous marketing and business development positions during his extensive career.  Shawn looks forward to meeting with students to explain the details of the CPA Program. Here he offers a bit of background on the program and what grads can expect to get out of the experience.

Students gravitate towards a CPA because they want the competitive advantage in business that an internationally recognized designation like a CPA offers. A major misconception is that a CPA designation is solely for those who wish to pursue careers in accounting firms. The CPA is modernizing accounting education in that the focus has shifted from crunching numbers to creating well-rounded business professionals. Our programs focus is on management skills, finance, strategy and governance in addition to traditional accounting practices like audit and taxation. Additionally, students are drawn to the perks of our programs which are designed to provide students with hands on work experience before graduation.

As CPA is a professional designation, CPA Atlantic’s programs are post-graduate, requiring all of our students to have an undergraduate degree. A little known fact is that CPA Atlantic accepts applicants from all different academic backgrounds, not just accounting and business graduates.

CPAs have the training to work in a variety of sectors including, but not limited to: oil & gas, real estate, finance, government, private practice, hospitality, IT, not-for-profit, media & communications, education, and construction. CPAs also enjoy the freedom to explore a career in the international market. Working all over the world in places like Hong Kong, the UK, Australia, the Cayman Islands, Bermuda and France.

Dal students will gain a thorough understanding of the CPA designation and will realize the CPA is more than an accounting credential; it’s a business credential.  Students will also benefit from career advice with regards to potential employment opportunities.”

Shawn Smith will be in the Rowe for individual meetings this Thursday, March 26, between 1:00 – 4:30 p.m. To RSVP, e-mail Shawn at ssmith@cpaatlantic.ca. For more event details visit myCareer.