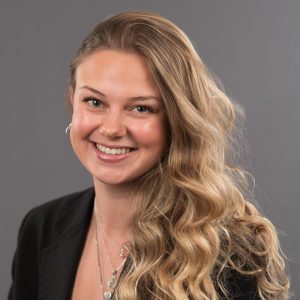 Tiffany Butt graduated from Dalhousie’s Bachelor of Commerce Co-op program in May 2022 with a major in Managing People and Organizations. Originally from Newmarket, Ontario, she knew she wanted to seek education opportunities outside of her hometown and see what different schools had to offer. While researching business degrees, she was attracted to Dalhousie’s mandatory co-op program for Commerce and the thrill of moving to the Atlantic coast for the first time. “It was the best decision I have ever made,” she says.

When reflecting on her time at Dal and how it prepared her for a post-grad career, Tiffany looks back fondly on her final co-op in particular, which she completed at Lockheed Martin, a global security and aerospace company. There, she worked as a Junior Project Manager creating and continuously updating the Ship Work Breakdown Structure, which provided an up-to-date schedule for multiple departments and helped everyone stay connected with their scope. She loved working on the Canadian Surface Combatant program, which involved designing and manufacturing an advanced combat ship fleet that will be used to protect the Royal Canadian Navy throughout their various missions for the next four decades. Tiffany found the co-op challenging, but that’s exactly what she enjoyed about it. The work she was doing was more complex and technical than anything she had done before, which resulted in her improving on many skills such as attention to detail and public speaking. She then transitioned from her co-op to part-time work at Lockheed Martin while supporting the new co-op student.

Tiffany was most excited about how different her role at Lockheed Martin was from her previous work experiences. She was exploring project management as a career option at the time and this role gave her great insight into what working in that field would entail. She was also looking forward to working in a new industry. “My previous co-ops were in the Information and Technology space, so it was interesting to learn about aerospace and defense.”

During her time at Dal, Tiffany was also heavily involved in the Rowe Women in Business Association (WIBA). She first joined during her second year as a General Member. In her third year, she joined the executive team as a Conference Co-Chair, where she planned and coordinated WIBA’s annual conference. In her fourth and final year, she became President of the society. She shares that she most enjoyed meeting a variety of people through WIBA, including students, faculty, and business professionals, who introduced her to several opportunities. In addition, she appreciated watching the society evolve over the years. While she was President, WIBA’s member base doubled from the year prior, and their executive team grew to include a council. “It was so nice seeing how many people wanted to get involved and bring forward ideas to make the society better.” WIBA also helped Tiffany secure two jobs and get out of her comfort zone. She shares that she used to be terrified of speaking in front of others, but her society involvement allowed her to practice and greatly improve skills such as networking and public speaking.

When asked for advice for other students, Tiffany says, “Take risks and try something new! Whether that be applying to a different company or within a different industry, or joining a new society, you may uncover a new interest that you were not aware of.  You will also meet some pretty great people that you wouldn’t have gotten to know otherwise. It’s all about building your network.”