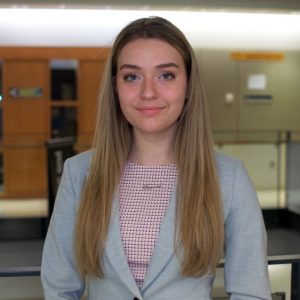 Second-year student Lauren Palmer chose Dalhousie because of its renowned Bachelor of Commerce Co-op program, accompanied by the immersive learning environment. With ambitions to major in Accounting and obtain a certificate in Quantitative Finance, she always knew she would be a Commerce student. “My mother is also a Commerce Co-op graduate, so you can kind of say it’s in my blood,” she comments. Lauren originally planned to obtain her degree before enrolling in law school, but she quickly realized her passion towards business, more specifically accounting, after her first semester in the program. She is proud of being able to manage her schoolwork, extracurricular activities, and her part-time job as a Research Assistant at Dalhousie.

Lauren will be starting her first of three co-ops in January 2023 as a Tax Analyst at Deloitte, and she credits networking with helping her land the role. Specifically, Lauren met another student who had already completed a co-op at Deloitte who was willing to give her an introduction. “After meeting my now good friend, co-president of the Dalhousie Accounting Society Lauren Johnson, at a first and second year networking event in September 2021, she presented me with the opportunity to meet with her manager at Deloitte and gave me the ability to get my foot in the door,” she says. “I am excited to be able to work in the tax field during the winter tax season. Although I know it will be busy, I also know the experience and knowledge I will gain will be unmatched.” In addition to networking within her society, she took advantage of Management Career Services’ resources to secure her first co-op. “If there is one thing that I associate with MCS, it’s networking. They really got it into my head that good networking skills are an asset to any resume.”

Lauren’s first-hand experience of the value of student societies inspired her to get involved at the executive level. She is currently the Assistant Vice President of Internal Affairs on the Dalhousie Accounting Society. Not only does she enjoy the role, but she is grateful that it allows her to give back and help those who were in her position last year.

Lauren says she is most eager to apply what she learned in her classes to real-world situations during her co-ops. She finds it surreal to think that questions she would answer in her first-year accounting courses may play an integral role in her occupation in the future. When asked for advice for other students, she replied, “Getting involved is one of the most important and influential things you can do in your first year. I was part of three societies, and even before I was able to secure my dream co-op with Deloitte, when I talked to recruiters they were always blown away by my extracurriculars. While grades are certainly important, showing that you are passionate about what you’re doing is a major selling point for anyone who is hiring. It demonstrates that you will show that same level of commitment to their firm.”