We’re delighted to highlight just a few of the podium-worthy results our students have earned at recent business competitions, conferences and more during this winter term:

For 12 years and running, the competition invites students from Dalhousie and Saint Mary’s to put their interview skills to the test, culminating in a live interview final in front of an audience. This year’s first- and second-place winners went to Dalhousie Bachelor of Commerce students Adrian Hutcheson and Briana Dologh. Read more about Adrian’s big win.

Out of more than 2,200 submissions, three Rowe School of Business students (Tatum Freigang, Tiana Vuckovic and Josh Boothroyd) were included among the competition’s top 22 finalists from across Canada, where they received a paid trip to Toronto to compete in the final round at Google Canada.

Commerce students Josh Biggar, Blake Newell, Clare Murphy and Mahmoud Ahran won this year’s prestigious annual supply chain and logisitics case competition in Denver, CO. This marks the third win within four years for the Rowe School of Business, making it the only school to win more than once. 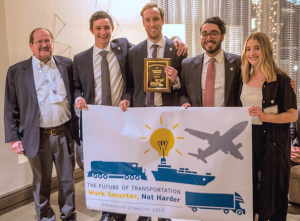 Dalhousie’s DECA U (Distributive Education Clubs of America) chapter was founded in the fall of 2016 and is the first DECA chapter in Atlantic Canada.

At this year’s annual DECA U Provincial Conference in Toronto, the group brought home two awards for New Chapter Award and the Largest Chapter Provincial Participation, along with a host of individual and group awards.

28 Dalhousie CRMBA students participated in the 2017 MBA Games, hosted by Vancouver Island University in Nanaimo, returning with a second-place win! Read more about their experience.