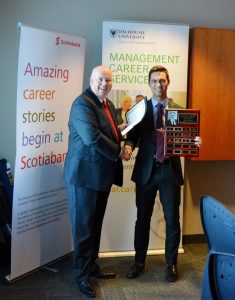 Fourth-year Bachelor of Commerce student Adrian Hutcheson is a familiar face in the Rowe building. President of the Dalhousie Investment Society and VP Academic for the Rowe JDCC, he can also add winner of the 2017 You’re Hired! Interview Competition to his growing list of extracurricular accomplishments.

Consisting of three rounds, the You’re Hired! Interview Competition puts students’ application and interviewing skills to the test. The first round is a judging-panel review of the applicants’ resumes and cover letters. Top scorers move on to round two, where they present a 1-minute elevator pitch and put themselves through the rigours of mock interviews with a host of employer partners. Finally, the three top candidates (two from Dalhousie and one from Saint Mary’s University), are put through a nerve-wracking interview in front of a live audience.

Adrian says that the competition was exciting and different from other experiences he’s had at Dalhousie. His preparation process was both simple and effective: “To prepare for both the elevator pitches and first round interviews I think it is most important to be able to decide what parts of your life (career, school or personal) are the most interesting for the judges to hear about. I think a big part of being successful in the competition is the ability to connect the skills and experiences you have in a way that relates to the requirements in the job posting. If you can communicate the value you bring to the company, the interviewers are more interested in you.”

To future students considering the competition, Adrian had this advice: “I would recommend this competition to students in every year of the program because it gives you an opportunity to practice one of the most important skills you will need to have in order to be successful in the job market. There are very few opportunities to practice these skills without a real job on the line, so when they come up it is important to take them.” 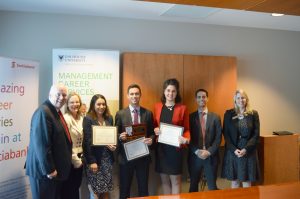