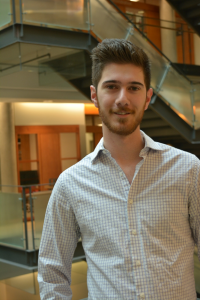 Matthew is currently a third-year Bachelor of Commerce student who has completed two work terms that says have made a substantial impact on his career pursuits. Prior to starting his second work term, Matthew intended to major in finance; however, after working on numerous sales and marketing campaigns, he made the switch to a marketing major.

His most recent work term was with Robotnik, a computer sales and support business. Throughout his time at Robotnik Matthew continually sought new work projects in different areas of the company, allowing him to make a bigger impact during his work term, and more importantly, learn about possible career options.

Matthew shares that he was encouraged and supported to take on more work and expand his job role.  He found it a helpful to have such a good relationship with his supervisor:

“During my co-op, I was fortunate to have a fantastic supervisor and mentor in Tomek Obirek, VP of Growth at Robotnik. Tomek and I got along very well both personally and professionally, something that made me want to go above and beyond to stand out. I found myself taking on extra projects and unassigned projects to make the most of my time at Robotnik while learning as much as I could about the expanding field of medical voice recognition software. Dragon Medical is a product that is sold online. In my free time, I chose to redesign the entire American site to include more relevant information and streamlined layout, as well as the Canadian one where I built an entire support portal with a full FAQ, leading to significantly less strain on the support team answering simple questions.   Tomek was very proud of what I had done and helped me to refine and put on the finishing touches, a fantastic learning experience and shining moment in my co-op work term”.

Tomek nominated Matthew for the award as a result of the significant contributions he made during his four-month term: “Matthew worked so efficiently and had so much on the go when he left that we felt one student simply couldn’t take on the entire role that he filled, and we hired two instead”.

Matthew will be recognized, along with co-op students and employers from faculties across campus, this evening during the inaugural Dalhousie Top Co-op Awards. Congratulations to all of our award winners!