Archives for Run for the Cure 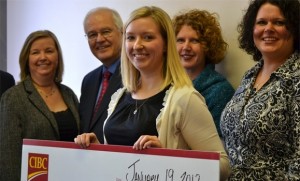 Congratulations to School of Nursing student Denyne Park on receiving two of the top awards from the Canadian Breast Cancer Foundation’s (CBCF) post-secondary challenge.  For the 2011 Run for the Cure campaign, the CBCF introduced a post-secondary challenge to encourage greater student participation and create a friendly fundraising competition between post-secondary institutions across Canada.  In total, 257 teams from 66 institutions participated.
Ms. Park was the captain of the Dal Nursing team, whose 80 members raised nearly $11,000 – with $2,700 of that total raised by Ms. Park herself.  For her efforts, Ms. Park received a $10,000 CIBC Education Award for being one of the top 15 online fundraisers, as well as a Team Captain Leadership Award for raising the most funds in Atlantic Canada.  Ms. Park shares the credit with her motivated team members saying, “It was great to feel like we were part of something more than just Dal Nursing.  We were part of a nationwide competition, and we were in it to win it.
To read more, see the DalNews story.