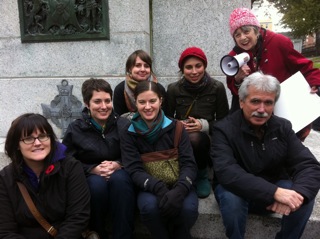 A group of students and faculty from the School of Social Work joined the Occupy Nova Scotia rally at the Grand Parade on Friday, November 4th.  The group attended the rally to be a presence when the Nova Scotia Association of Social Workers, represented by the executive director Robert Shepherd, members of the social action committee, and practising social workers came to speak out about the growing disparity between rich and poor, the erosion of the social safety net, the inadequacy of the neo-liberal agenda and the importance of this grassroots movement as an alternate voice in our society.  Included in the group were School of Social Work faculty members Dr. Carolyn Campbell, Dr. Marion Brown, Dr. Judy MacDonald and Dr. Merlinda Weinberg; instructors Paul O’Hara, David Williams and Jeanne Fay; as well as BSW and MSW students.  Members of the School of Social Work have provided ongoing support and concrete services to Occupy Nova Scotia.  Students are exploring ways to continue to work collaboratively with the movement, although the recent dismantling of their encampment in Victoria Park will pose significant challenges.