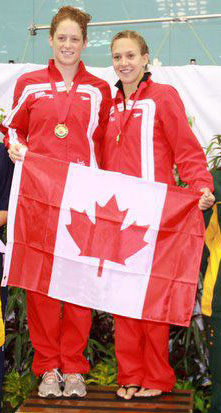 Audrey (left) takes to the podium with her teammate

Congratulations to Audrey Prayal-Brown, an MSC Kinesiology candidate in the School of Health and Human Performance (Supervisor – Dr. John Kozey) who recently won gold and silver at the 2011 Commonwealth Lifesaving Championships in Durban, South Africa.  The sport of lifesaving is competitive lifeguarding – certified lifeguards put their skills to the test against each other.  It is the only sport in the world where participants first learn their skills for a humanitarian purpose and only later use them in competition.  It is internationally recognized by the International Olympic Committee (IOC) and the Commonwealth Games Federation.

Audrey won a gold medal in the Line Throw competition – the competitor throws an unweighted line to a fellow team member located in the water approximately 12 m distant and pulls this “victim” back to the poolside – with a time of 11.17s, a Canadian and Commonwealth record.  Audrey and her team won silver and set a Canadian record in the Mannequin Carry Relay – a team of four lifesavers must swim 25m carrying a 40lb mannequin before passing it to the next member of their team – with a time of 1:36.76.

In addition to this success, Audrey also presented “Buoyancy testing: study 1 – Determination of Underwater Buoyancy” at the 2011 National Association of Canadian Ergonomists Conference in London, Ontario.  The presentation is the first of a three phase study that Audrey is working on with a team of researchers comprised of John Kozey, Dana Sweeney and Paul Potter.  She presented the same study at the Atlantic ACE Conference this past spring and won the Undergraduate award.