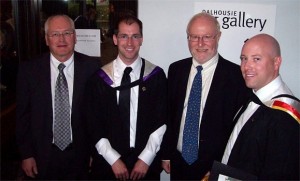 The Knowles Family (L-R Stanley, Scott and Jeff) with President Tom Traves at convocation in 2007.

There are many ways to honour the memory of a loved one.  Dalhousie alumnus Jeff Knowles (’07) and his father, Stanley (’74), mother Jean and sister Colleen chose to celebrate the life of their son and brother Scott (’07) by establishing the Scott Knowles Memorial Pharmacy Award.  A graduate of the College of Pharmacy, Scott passed away unexpectedly in 2011.  The award named in his honour will offer $4,000 each year to a New Brunswick student graduating from the College of Pharmacy who is returning to the province to practice in a community pharmacy.  To learn more about Scott and the award, read the story in Dal News.