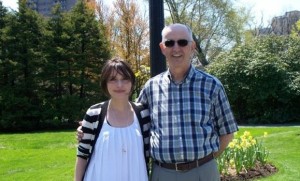 Roger Montigny with his daughter, Kendra, who graduated from Dalhousie Pharmacy in 2008

Roger Montigny (BSc (Pharmacy)’74) was one of those rare breeds – a person who lived passionately by his convictions and sought to make the world a better place through his career as a pharmacist.

When Roger passed away in December 2010, he left behind a grieving family and community.  To honour his love of pharmacy and education, Roger’s family decided to establish the Roger Montigny Memorial Fund at Dalhousie with a gift of $25,000. The purpose of the fund is to provide an annual award to a third-year pharmacy student from Prince Edward Island who has demonstrated a passion for pharmacy and an interest in pursuing community pharmacy.

“The family wanted to leave a legacy for someone who has made a difference in the profession of pharmacy,” says his wife, Belinda. “We knew this award would be Roger’s prescription for future students.”