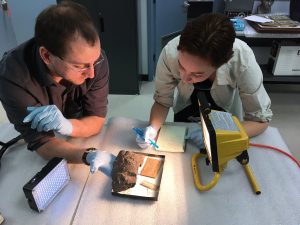 Charlotte Adams, a student from Dalhousie Earth Science, is working with Matt Stimson (Saint Mary’s University) to study a series of Carboniferous fossil footprints at the Nova Scotia Museum. The fossil footprints were collected by David Honeyman in 1873.

David Honeyman was the first curator of the Museum and the first Professor of Geology at Dalhousie University (1878-1883). In his publication Giants and Pigmies (1887) and a paper in the Proceedings of the Nova Scotia Institute of Science (1874), Honeyman mentions fossil footprints from Wentworth, NS. In collecting the specimens, Honeyman was “assisted by Andrew Jack” and the Museum collection record for the footprints lists Andrew as a Collector.  The Proceedings also lists two other people as field assistants, Mr. Frank West and Mr. Robie Cogswell.

Wondering who these assistants were, we find the 1871 Census shows these fellows lived in Halifax and were 14 years old in 1871. From this, it seems these Assistants were a few of the students in the “Practical Geology” classes that Honeyman organized at the Museum from 1870 – 1873.

Today, having a Dalhousie student returning to examine these fossils 140 years after they were collected as part of an early Practical Geology program run by Honeyman and the Museum — well, that is pretty neat!  #NSM150   #Dal200

Congratulations to Harold Kuehn for the successful defense of his PhD thesis entitled “Along-trench segmentation and downdip limit of the seismogenic zone at the eastern Alaska-Aleutian subduction zone“.  His examining committee were all uniformly impressed by the quality of his work! Congrats also to his supervisor Mladen Nedimovic.