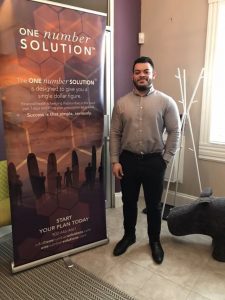 Our Student Spotlight this week highlights a local student who has had success with Venture for Canada’s Atlantic Internship Program. Jason Watts, a second-year Commerce student majoring in Marketing, has spent his first co-op term this winter with Black Star Wealth Partners as a Marketing Assistant in Halifax.

Jason and his family moved from India to Cole Harbour, Nova Scotia when he was only 4 years old and it has been his home ever since. Choosing to go to school at Dalhousie was an easy decision for him to make since his mother worked for the university. He found himself drawn to the Commerce program in particular because of the three co-op terms, expecting that they will help him become more employable upon graduation.  He is also a proud member of the Dalhousie Football Club, having played a key role in their undefeated championship season this year as a veteran on the roster.

Last fall, during the job search for his first work term, Jason found himself in a bit of a panic to secure employment. He decided to leverage his personal network by speaking with a well-connected professional with whom he had a good relationship. His contact reached out an employer who happened to have secured Venture for Canada funding and created a myCareer job posting for the upcoming co-op term. As a result of his contact’s recommendation, Jason was fast-tracked to the interview stage of the hiring process with Black Star Wealth Partners. Fortunately, the interview turned into a job offer, which turned out to be a perfect fit. Jason soon realized that he made the right decision, quickly discovering that working for a small business comes with numerous perks that larger companies may not offer.

“I love working for a small business. First of all, you feel like you are part of a team rather than just another face. Secondly, it helped me realize that running your own business isn’t all picture perfect, but that the feeling of success is much greater when completing tasks because they have a big impact on the company right away. This is unlike what some people experience in working for a larger organization where you may not get to see the immediate impact of the work you’re doing.”

After his first experience securing a co-op through Venture for Canada this semester, Jason wants to ensure that it isn’t his last. In his words, “I plan on securing all three of my work terms through the Atlantic Internship Program and have been thinking about applying for their Fellowship program after graduation.”

The Venture for Canada Atlantic Internship Program includes a training conference that participants have the option of attending. The purpose of the conference is to provide students with advice on how to succeed in the workplace and make the most of their co-op experience. Jason was keen to take advantage of this, finding as much value in the networking aspect of the conference as he did in the presentation aspect.

“I attended their two-day training conference where they gave us advice and tips on how to act in the workplace and make the most out of our co-op. Most importantly, it was a huge networking opportunity which I used to my advantage.”

When asked about the most valuable skill he gained during his time at Black Star Wealth Partners, Jason shared the following:

“I’ve learned plenty in my time working at Black Star Wealth; most importantly about the concept of being interested versus committed. If you’re interested in the task/project, you may want to achieve the goal, but it doesn’t mean you’re fully invested. When you are committed, you truly believe in the idea and want to do whatever it takes to accomplish the end goal. I will not only bring this concept with me to my future co-ops but will also apply this to other areas of my life.”

If the Venture for Canada Atlantic Internship Program sounds like something you might be interested in, we encourage you to visit their website. Or if you’re a second-year Commerce student like Jason, you can talk with them in person at our Commerce Summer Social on May 8th in the Rowe atrium. The deadline to apply for their September 2019 program start is right around the corner on July 22, so don’t wait!