The end of November can seem daunting with final papers, projects and exam period fast approaching. Amid all of the chaos however, the MBA Society brings you the Annual CRMBA Winter Formal. This event gathers students, faculty, and staff members together to join the festivities. This year the formal took place on November 27th at Casino Nova Scotia. The venue was a circular room with a balcony overlooking Halifax’s famous waterfront. We couldn’t have asked for a better night – clear skies, stars shining, it was a picturesque evening. 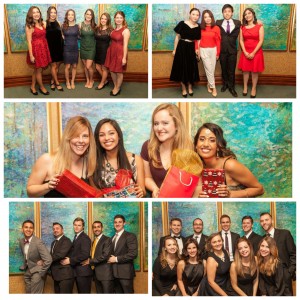 The night began with a reception as guests arrived. A photographer was set up to take pictures of everyone dressed to the nines. A three course meal was served as two students who MC’d the evening  kept the audience laughing and giggling all night long. As dessert was served, the award ceremony began. Each year, both cohorts vote for students to win awards such as “First to be CEO” or ” Most Likely to Commit Corporate Espionage” (I won’t tell you who won that). It was a walk down memory lane as stories were told about each award winner as they accepted their trophies.

The dinner finally concluded with the highlight of the evening – the MBA Games Fundraiser. Four jars were placed at the front of  the venue at the beginning of the night. Each jar had the name of a professor who had agreed beforehand to take part in the fundraiser. Throughout the night, guests could place their loose change in the jar of the professor they wished to sing a Karaoke song at the end of the night. The professor with the most money in their jar by the end of the evening had to perform for the audience. We were regaled with our accounting professor’s rendition of “Man I Feel Like a Woman.” The fundraiser raised $280 for the Ronald McDonald House.  The night ended with a dance where everyone was able to burn some calories destressing to Beyonce.

Although most of us get caught up in studying, it is always important to take a minute and breathe. Dalhousie’s CRMBA program excels at offering many types of events like the Winter Formal to bring the program together outside of class and enjoy a little study break.