Five days into the new year, 600 MBA candidates from 17 Canadian business schools travelled to the nation’s capital to prove their athletic and academic acumen. At stake: the Schulich Cup for Academics, the Tzitzi Watul award for Spirit, and the newly introduced Telfer Cup for Athletics.

This year, Dalhousie’s Team Rowe was led by co-captains Lauren Murray and Paul Best (both Class of 2018). Lauren discusses a main challenge for the team this year: travelling through a fierce East Coast storm to reach the games. “We managed to get the whole team there even with the storm on our major travel days,” she says.

Despite late arrivals, the team managed to place first in the opening ceremonies dance event; this helped bring Dalhousie to an overall third place in the Spirit category.

Team Rowe also put forth a good showing in the Academics and Sports events. While the case teams did not advance to the finals this year, both the Dodgeball and Volleyball teams reached the semi-finals. According to Laurier LeClair (Class of 2019), “My highlight of the weekend was getting to experience all the great teamwork on my sports teams. We didn’t place, but we were all winners in my heart!”

Meanwhile, the Basketball team pushed through back-to-back games to take the championship, to the thrill of both the players and the rest of Team Rowe. 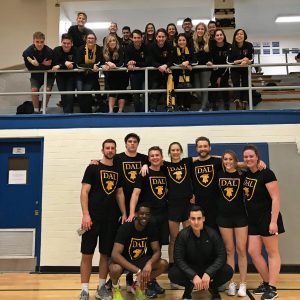 “After months of preparation, we are so proud of the showing that Team Rowe had at MBA Games 2018,” says Lauren, “As always, it was a great opportunity to showcase our skills on the national level.”

Paul is equally as impressed by the way Team Rowe came together: “The MBA Games in Ottawa was a tremendous success due to the hard work of the committee, team, and sponsors. Everyone contributed to our team’s success, reinforcing the theme of the weekend: #moretogether.”

Indeed, More Together was a very apt theme for this year’s MBA Games. In addition to the different competition events, participating schools came together to raise a combined $45,000 for the Moose Hide Campaign.

(A grassroots movement of Indigenous and non-Indigenous men and boys standing up against violence towards women and children, the Moose Hide Campaign was introduced as the MBA Games charity for the MBA Games 2017 in Vancouver.)

Overall, the MBA Games were a highlight for everyone involved. “The team had a great weekend,” Lauren explains, “and we have a good group excited to take on planning next year.”