Golf has long been the sport of choice for conducting business and making deals. It provides fresh air, time away from the office, and a chance to talk business. I mean, just imagine trying to close a deal while playing football with a potential client….Ouch. But while you don’t have to possess a consistently accurate 300 yard drive, knowing the basics of golf allows one to avoid the embarrassment of declining a boss’ invitation or making a client think it’s your first time.

On October 17th, CRMBA students participated in the first annual CRMBA Alumni Golf Tournament & Fundraiser held at Indian Lake Golf Course. The cohorts lucked out as the 17th was a beautiful autumn day – a crisp breeze, colourful leaves falling slowly from the trees,  and the glisten of the sun off the course’s numerous water hazards (now home to quite a few golf balls). 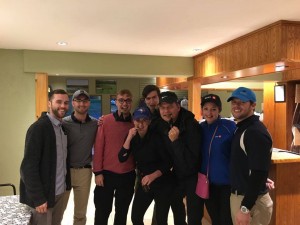 The tournament attracted over 40 participants, including current students, alumni, and faculty. In order to formulate fair teams, participants were asked to rank their golf expertise on a scale of “I know my handicap” to “What’s a handicap?.” Groups of four (FORE!) were strategically created with at least one experienced golfer to help guide beginners – who were the majority.

And the Green Jacket Goes To…

The day finished in a three team tie for first place, with each reporting a score of one over par (+1). However, because most MBAs are naturally competitive, a tie just wouldn’t do. With darkness fast approaching, a sudden-death putting challenge was used to crown the eventual winner. There were medals, prizes, and beer, but at the end of the day everyone was able to feel like a winner.  Not only did they get to work on their golf game and do some networking, they also contributed to a good cause. As part of the CRMBA’s commitment to the local community, the funds raised through the tournament will be donated to the IWK Foundation.