As a country bordered by three oceans, Canada is truly an oceans nation. In 1997, the Oceans Act was brought into force, making Canada the first country in the world to have comprehensive national ocean legislation. Since then, various area-based measures have been adopted in Canada to facilitate governance over marine and coastal spaces.

Canada is now applying Marine Spatial Planning (MSP) as a forward-looking approach towards ocean governance, as discussed in my first blog. But do you know that the renowned Bay of Fundy is the place where Canada’s story of area-based management and MSP begins?

Maybe you are impressed by the extremely high tides and eroded rocks in the Bay of Fundy. But back in the 1980s, this was a busy area with intensified fishing and shipping activities. In 1983, Canada introduced a Traffic Separation Scheme (TSS), which was like an invisible highway on the sea, guiding commercial vessels to pass safely and reducing groundings and collisions.

However, it was overlooked that the designated TSS overlapped with a critical habitat of the endangered North Atlantic Right Whale (Eubalaena glacialis). Vessel strikes became prominent threats to right whales, accounting for about half of their injuries and deaths. Subsequent research found that a slight change of TSS routes (four nautical miles to the east) with speed limitation could significantly reduce the risk of vessel strikes by 90%. After 20 years of implementation, the TSS was amended. For the first time in history of the International Maritime Organization, a routing system was modified to protect marine mammals.

The successful experience of the Bay of Fundy TSS shows that spatial planning can coordinate human activities and protect marine ecosystems. The TSS also paved the way for future development of spatial planning initiatives on the Atlantic coasts.

In 1998, the Eastern Scotian Shelf Integrated Management (ESSIM) Initiative was launched. UNESCO recognizes that ESSIM is one of the five early MSP initiatives in Canada. ESSIM covered a large section of the offshore areas, most of which are located within Canada’s exclusive economic zone and beyond the 12 nautical mile territorial sea limit. This area is of significant ecological value, rich in living and non-living resources and contains multiple human activities such as traditional harvesting, fisheries, trade, oil and gas exploration, and shipping.

Tremendous efforts were dedicated to balancing various ocean uses and developing a plan that can be accepted by all interested parties. A collaborative governance framework was created, consisting of a stakeholder participation forum, a Stakeholder Advisory Council, an Ocean Management and Planning Group with several issue-based working groups and a Regional Committee on Ocean Management. 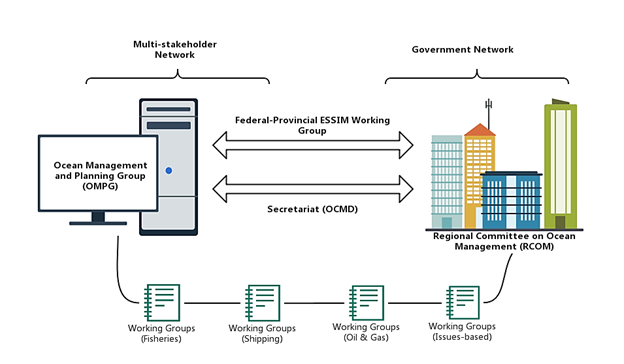 The ESSIM initiative had always been accompanied by debate and controversy. It took almost ten years to balance multiple interests, develop and revise the ESSIM plan. The plan was released in 2007 and endorsed by the Department of Fisheries and Oceans (DFO) in 2010. However, compared with the long planning time, the actual implementation process of ESSIM was very short, lasting for only five years. ESSIM was concluded in 2012. Outcomes from this ESSIM have been used to develop DFO’s existing Regional Oceans Plan for the Scotian Shelf and Bay of Fundy.

Experiences with Marine Spatial Planning in Atlantic Canada, including the traffic separation system and integrated management initiative, have provided valuable lessons for Canada. Integration and collaboration on the Atlantic coast show the way for the Pacific and Arctic coasts to develop their own context-specific practices.

Photo by Peter Lloyd on Unsplash