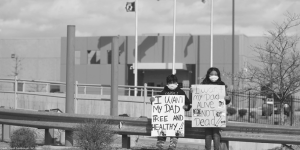 On January 21, 2020, the United States (“US”) reported its first coronavirus (“COVID-19”) case in the State of Washington. Less than eleven months later, the country reported over 9.3 million cases, with approximately 231, 477 resulting in death. Immigrant detainees within detention facilities across the US were one of the most vulnerable populations prior to the pandemic, and COVID-19 has exacerbated their vulnerability.

Immigration detention is not a new policy; it started with the Reagan administration in 1981 as a mechanism to control the influx of Haitian and Cuban refugees into the US. Today, immigration detention is a staple of US immigration policy. It is used to detain migrants pending their removal, or to effectuate their removal, and is controversial for a host of reasons. To start, the system itself is backlogged, which results in thousands of detainees being held for indeterminate periods of time while they await a hearing. Since immigration is a civil matter, detainees are not afforded the right to a court-appointed attorney. They are thus left unrepresented or forced to delay their hearings in order to obtain adequate legal funds. Immigration detention is also a billion-dollar industry since Congress authorized the use of private prisons as a mechanism to hold detainees in the late 1980s. Similar to prisons, private detention facilities depend on quotas which lead to the increased detention of immigrants.

As we turn to look at the conditions within immigration detention facilities during COVID-19, it is important to consider the universal human rights that should be afforded to detainees. Under Article 12 of the International Covenant on Economic, Social and Cultural Rights, everyone has the right “to the enjoyment of the highest attainable standard of physical and mental health.” This is further contextualized under subsection 2(c), which states that the full realization of the right to health includes a State’s “prevention, treatment and control of epidemic, endemic, occupational and other diseases.”

In broader discussions of international human rights, there is this notion that human rights are “universal,” and that every person has these fundamental rights that a country is obligated to protect. The problem with referring to international human rights as “universal” is that it is idealistic. Universal human rights are not afforded to immigrants, for example, because they are not regarded as equal to citizens within a particular country. At its core, immigration concerns the ability of sovereign states to legally exclude persons from their country. It is a system premised on the idea that a state has an obligation to its citizens, but that same obligation does not extend to “outsiders.” Immigration policies are created to allow entry to those immigrants who are “desirable” to a particular state, and to remove those who are “undesirable,” because they have entered illegally or overstayed. When we consider immigration detention, and we wonder about the absence of human rights protections, we have to come back to this awareness that immigration allows the state to value persons differently depending on where they come from.

Immigration detention in the US has been controversial since its inception. There have been reports from detainees discussing, among other things, sleeping on the floor, their families being torn apart, overcrowded and unsanitary facilities, and a lack of access to adequate health services. The COVID-19 pandemic has worsened a broken system. The conditions within detention facilities make it difficult to comply with the Center for Disease Control and Prevention (“CDC”) recommendations. Facilities are unable to maintain social distancing, provide masks to detainees, isolate those with the disease and adequately disinfect surface areas.

For example, Emilio Martinez, a detainee in North Carolina experienced a fever, aching bones, and fatigue while in detention; he was relocated to an area reserved for symptomatic detainees and received minimal care, but he survived. James Thomas Hill, a 72 year old detainee in North Carolina, reported experiencing shortness of breath and he passed away while in detention. Based on CDC recommendations, an individual like Emilio or James Thomas should have been provided emergency medical care. A person who showed emergency warning signs should have been sent to the hospital, where they would have been consistently tended to by nurses, and although they might have still died, they would have been given adequate health services up to and until their death.

In a detention facility in Georgia, officers used force to control detainees who were protesting against the lack of care for those experiencing COVID-19; use of force included deploying tear gas and shooting rubber bullets or pepper balls. In this facility, detainees who experienced severe COVID-19 symptoms were placed in solitary confinement: a severe form of detention with serious and lasting psychological effects. Further, detainees who were less symptomatic were not being isolated or looked after. Based on CDC recommendations, individuals who are symptomatic should separate themselves from others, rest, stay hydrated and take acetaminophens to manage their pain and discomfort. Additionally, once a person tests positive, they should avoid sharing items with others, clean all high-touch surfaces and wear a mask.

Looking back at Article 12(2)(c), America has an obligation to prevent, treat and control diseases. Immigration detention facilities, a creature of US policy, are not preventing, treating, or controlling the COVID-19 pandemic within their walls. Detainees are subjected to unsanitary, overcrowded, sometimes bed-less detention facilities; facilities that are non-compliant with CDC recommendations for social distancing and sanitation, that are not providing access to emergency medical services for extreme cases, and that are placing symptomatic persons in solitary confinement with minimal care or not isolating them at all.