Danielle Stanton-Turcotte is a PhD student working the neuronal specification and patterning, and regulation of axonal projections within the developing neocortex. She obtained a BSc degree from Rensselaer Polytechnic Institute in Troy, New York. (DMRF-Medical Neurosciences scholarship).

Marley Blommers is a graduate student exploring cytoskeletal regulators of neuroanatomical organization and connectivity in the brain. He obtained his BSc (Honours) in Neuroscience at Dalhousie University, and completed is honours project in the lab studying neuroblast development in the retina. (CGS-M scholarship).

Nick Zinck is an undergraduate MD student (Class of 2025) at Dalhousie University. He obtained his BSc (Honours) from Mount Saint Vincent University and MSc degree from the Department of Medical Neuroscience at Dalhousie. He is pursuing a Research in Medicine project in the lab exploring axonogenesis in peripheral ganglia.

Arlo Godel is an undergraduate in the Medical Sciences program at Dalhousie University working on a honours project on scaling and patterning of neural organoids.

Haleigh Bach is an undergraduate in the Psychology and Neuroscience program at Dalhousie University working on an honours project exploring cytoskeletal regulators of neurogenesis and axongenesis in the embryonic chicken neural tube. 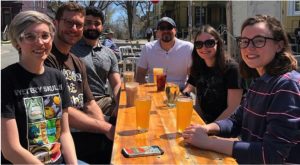