People with a diagnosed mental illness are no more likely to commit a crime than people without a mental illness yet continue to be over-represented in correctional facilities across Canada. Canada’s criminal justice system is ill-equipped to adequately support and care for people with a mental illness, often leading to further deterioration of an individual’s health status, decreased ability to integrate into the community post-release, and increased risk of recidivism. A compassionate response to an over-representation of vulnerable populations in the mainstream court system in Canada, problem-solving courts divert people whose crime is deemed to be a direct result of their mental illness from the mainstream criminal justice system. Pioneered and developed by individual communities, the components of these specialized courts depend on available resources and therefore vary in structure and delivery. To date, research has identified structural elements that are the most common such as a dedicated presiding Judge, Crown Prosecutor, Duty Counsel, probation officer, and representatives from mental health and addiction agencies and/or other community services. While the Judge in a problem-solving court plays a central role in creating a dignifying court culture, mechanisms and processes within problem-solving courts that support a court participant’s recovery journey and desistance from crime are not well understood, especially from the perspective of the person who has been charged with a crime. The emergence of problem-solving courts and the work of prominent academics in the development of therapeutic jurisprudence occurred simultaneously, however there are a number of ways that problem-solving courts, and more specifically, a mental health court program in Dartmouth, Nova Scotia draw on principles from therapeutic jurisprudence to create a court culture that recognizes how punishment may not be the best course of action to reduce crime and rates of recidivism. While the subject of therapeutic jurisprudence is of much debate, including whether it is even a possibility within a system designed to punish, such debate is not the focus here. Rather, the authors present an example of how components of therapeutic jurisprudence can be enacted within a mental health court program.

Therapeutic jurisprudence is a set of principles intended to guide a way of ‘doing justice’ that differs from the conventional criminal justice system. Instead of focusing on the provision of a punishment considered equal to the harm done by a crime, a person’s criminal charge (and the ensuing punishment) takes a back seat to the development of individual treatment plans and social connections that can reduce the risk of reoffending in the long-term. David Wexler has identified four distinct ways where specific actors within the justice system can ‘do justice’ in a way that is therapeutic which include: (1) the ability for professionals in the legal system to recognize how the law can create harms (produce psychological dysfunction) through labeling people or discouraging access to treatment (e.g., imprisonment or decreased privacy); (2) identifying and utilizing existing rules or exceptions (therapeutic aspects) within the law that can protect individuals (e.g., duty to protect, rights-based sentencing); (3) developing and/or utilizing variations in longstanding (structural) traditions (e.g., shifting hierarchical courtroom layouts) and processes (e.g., avoiding adversarial hearings) to promote dignity and respect (e.g. engagement of accused in developing treatment plans); and (4) shifting what and/or how judicial and legal roles are carried out to amplify their therapeutic potential (e.g., taking a recovery-oriented or a trauma-informed approach). Therapeutic jurisprudence recognizes the individual and community level harms commonly inflicted in the traditional criminal justice system and the potential to utilize court and legal processes as therapeutic agents to promote recovery and community reintegration. As a guiding framework, therapeutic jurisprudence necessitates the inclusion of health, community, and social services to provide care and support to mental health court program participants, shifting the focus from reducing recidivism to creating opportunities for therapeutic outcomes and building community connections.

In 2009, planning meetings between key stakeholders from the Nova Scotia Department of Justice (NSDJ) and the Nova Scotia Health Authority (NSHA) outlined and initiated the first problem-solving court in Dartmouth, Nova Scotia. The program began as the Nova Scotia Mental Health Court Program, which served people whose criminal charges were directly linked to a diagnosable mental illness. Since then, the court has expanded to include multiple problem-solving court programs under the umbrella of the Dartmouth Wellness Court (e.g., Opioid Drug Court Program, Alcohol Court Program, Judicial Monitoring Program, as well as the Mental Health Court Program). As such, the term mental health court will be used to refer to the specific program with the Dartmouth Wellness Court that serves people whose mental illness is clearly related to their criminal charges.

As the 10-year anniversary of the Nova Scotia Mental Health Court Program approaches, a research team was established to evaluate program evolution, health, social & justice outcomes, and continued areas for improvement through community-driven research principles. Through this community partnership, discussions about a pre-existing, unique component of the Nova Scotia Mental Health Court Program, the Wall of Hope emerged. The Wall of Hope is a permanent art display within the courtroom and is considered a testament to the number of people whose lives have changed as a result of participation in the court program. This Judge-led initiative provides inspiration to participants and staff and is a reminder that “just because you have a past, does not mean you have no future” (quote on the Wall of Hope). The remainder of this paper provides a description of the inception of the Wall of Hope, and of how such initiatives may be viewed as mechanisms to realize therapeutic jurisprudence. This paper was a collaborative effort without any data collected beyond the authors’ own personal knowledge and experience with the Wall of Hope at the Dartmouth Wellness Court and as such, ethics approval was not required.

The Wall of Hope

When you walk into the court room used by the Nova Scotia Mental Health Court Program, a quote from a past participant; “just because you have a past does not mean you have no future” is posted on the wall behind the bench where the presiding judge sits (Figure 1). 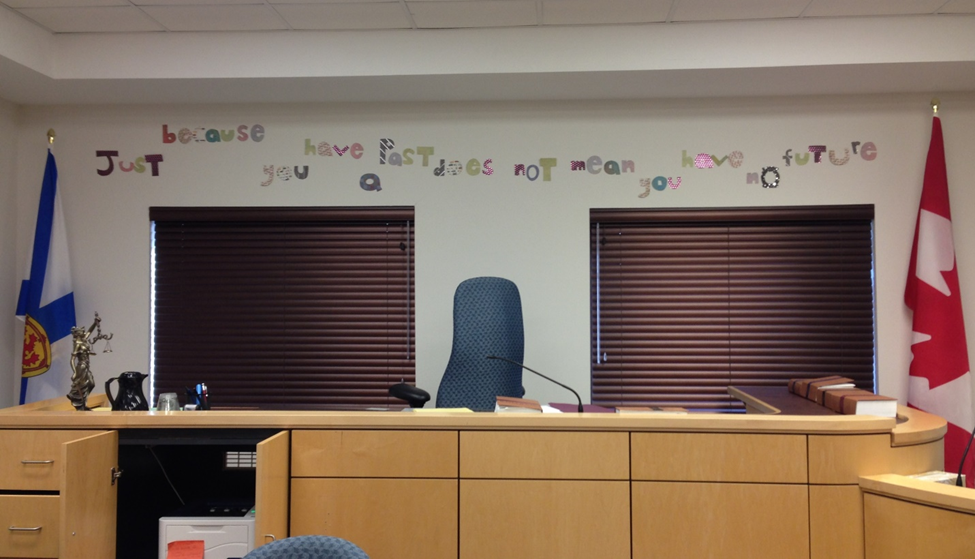 For some people, attendance at the mental health court program may be their first time in a criminal court in their lifetime or the first time that the connection between their mental health and a criminal charge has been acknowledged. To see the message behind the judge on a first, anxiety ridden court experience can provide a sense of “hope [knowing that someone is] not just going to slice [them] up (devalue their story and sentence them)” (video). As described by one program participant, seeing the quote provided him with reassurance that even though he did not completely understand the court process, he had confidence that “it’s going to be alright as long as [he] show[s] up and does what needs to be done …. The compassion [he felt through the quote] would get [him] through” (video). This variation in the structure of the courtroom allowing for the display of inspirational, participant quotes eased feelings of anxiety, instilled hope, and was a way for program participants not currently in the room to encourage and support others going through the program.

To the right of where program participants stand when in discussion with the court, works of art created and donated by participants line the wall spanning from Indigenous art, poetry, paintings, collages, tactile pieces (e.g, rug hook) and drawings. For one participant, the opportunity to contribute to the Wall of Hope became a sense of pride where his art work represented his “first baby step into reaching out, crossing a boundary that [he is] starting to do things that [he had] never done before but had always wanted to do and moving forward in a way that [he] never thought [he] would move forward before” (video). The artwork is a reminder that it is possible to move beyond the criminal justice system and that doing things “just for the sake of being fun and joyful” (video) are important contributors to health, recovery and well-being. The Wall of Hope, a judge-initiated installation, is a way for past participants to communicate with current and future participants through art, that graduation and a life outside of the label of ‘criminal’ is possible.

The Wall of Hope challenges longstanding punitive traditions that are common in Canada’s mainstream criminal justice system. Through the application of principles of therapeutic jurisprudence, the Wall of Hope supports variations in court traditions and processes and shifts what and/or how judicial and legal roles are carried out to amplify the therapeutic potential of the mental health court program. As central members of their own team, program participants (or artists) can claim a space on the wall to represent their own progress and growth and communicate hope and encouragement to others who share the experience of being a mental health court program participant.