The DalTRAC team promoted the Thumbs Up! Share the Road Nova Scotia campaign during SWITCH Spring Garden on Sunday, September 25. This well attended event allows HRM residents the opportunity to explore streets by foot, bike, or other modes of active transportation. Spring Garden Road was closed off to traffic to encourage recreation activities, markets, and entertainment. 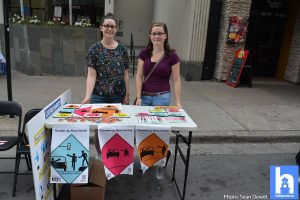 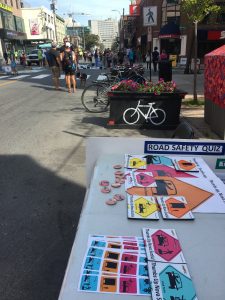 In January 2017, five DalTRAC students will present nine research papers at the 96th Annual Meeting of Transportation Research Board (TRB) in Washington, D.C. The session information can be found below:

Join Dalhousie Transportation Collaboratory (DalTRAC) for our Pleasant October Hike at Point Pleasant Park at 2pm on Wednesday October 12, in partnership with Halifax Parks and Recreation and Hike Nova Scotia.

The hike is one of about 45 events for the Halifax October Trail Challenge program which runs from October 1-31. It encourages individuals, schools and community groups to get outside and be active, and highlights local trails and parks. This will be a fun, student-led hike along one of the trails within Point Pleasant Park. The actual trail will be determined closer to date, however expect approximately 3km walk. There will be no cost to attend however we would like people to register by emailing daltrac@dal.ca. Hike NS will be providing a trail prize to give away at the end of the hike.

For more information about hike events throughout the province visit the Hike NS website at www.hikenovascotia.ca or Halifax Recreation at www.halifax.ca/rec/

The DalTRAC team promoted the Thumbs Up! Share the Road Nova Scotia campaign throughout Bike Week 2016. From June 3-12, bike safety tips and videos were shared on social media, and community events were attended to distribute promotional materials and discuss safer road sharing with community members. We partnered with the Town of Pictou Parks and Recreation department for their Pictou County Bike Week and attended events in the Halifax Regional Municipality. Switch Open Street Sundays was held on June 5 in Dartmouth, with over 500 community members enjoying the open streets with activities for all ages. We also wrapped up the week attending the Halifax Cycling Coalition Bike Expo on Sunday June 12 at the Emera Oval. 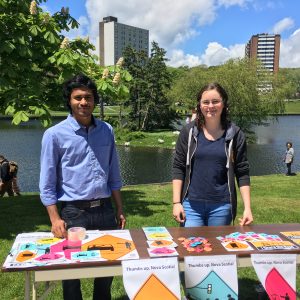 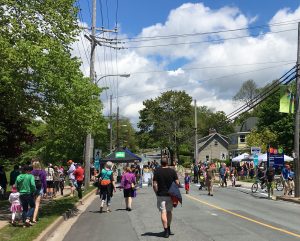 Haomiao Cheng, a visiting student from Tongii University in Shanghai, China, will make a presentation on her work entitled The Effect of Wealth Gap on Pedestrian Network and Urban Form in Shanghai.

The presentation will take place on Thursday May 26,2016 at 11am in room B105. Everyone is welcome to attend!

As part of the Dalhousie School of Public Administration’s Speakers’ Series, the MacEachen Institute for Public Policy and Governance and the School of Public Administration at Dalhousie University are jointly hosting the Social Responses to the ‘Big Lift’ Panel Discussion. The panel discussion will take place in the Paul O’Regan Hall at the Halifax Central Library on Wednesday, June 1 between 11:00am-12:30pm. Speakers will include Calvin Burns, Business School, University of Strathclyde; Anatoliy Gruzd, Ted Rogers School of Management and the Social Media Lab, Ryerson University; Ahsan Habib, School of Planning and Dalhousie Transportation Collaboratory (DalTRAC), Dalhousie University; and Kevin Quigley, MacEachen Institute for Public Policy and Governance, Dalhousie University.

On Tuesday March 8, Dalhousie Transportation Collaboratory hosted the #SharetheRoadNS Open House at Dalhousie University. This open house was to highlight the success and experiences of the many stakeholders to Share the Road initiative, and discuss what’s working, what’s missing and what’s next for share the road education and awareness across Nova Scotia. The event began with Dr. Ahsan Habib highlighting the lessons learned from the campaign, and partners Dave MacIsaac (Halifax Regional Municipality) and Gord Tate (Municipality of the District of Chester) discussing their experiences with the Share the Road initiative. Following the presentations, open discussion commenced through dialogue with a knowledge lead, drawn from the transportation and road safety community. Six topic areas were discussed where safety issues can occur between different road users. From these discussions there were three key points that kept presenting themselves, including the need to advocate for transit as this will encourage walking and biking, the need to educate all road users on the rules of the road and importance of sharing the road, and the need to further promote the Share the Road campaign and build additional partnerships.

DalTRAC would like to thank everyone who attended and contributed to the success of the event. The full #SharetheRoadNS Open House workshop report will be released to http://www.dal.ca/sites/share-the-road/get-involved.html in the upcoming weeks.

Join the Dalhousie Transportation Collaboratory (DalTRAC) for an afternoon of presentations and discussion regarding road safety and sharing in Nova Scotia. 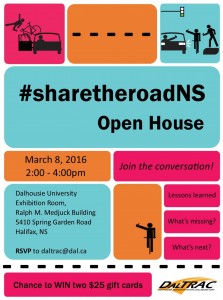 The Share the Road campaign has grown substantially in size and outreach over the last year. The campaign has successfully involved itself in multiple events and promotions, including community events that aligned with our core values, as well as holding its own independent events to raise awareness and gain support. DalTRAC, in partnership with the Halifax Regional Municipalities Crosswalk Safety Advisory Committee, hosted the first Crosswalk Safety Information Café in March.In July, Share the Road Nova Scotia, along with hundreds of cyclists, attended the kick off to the Heartland Tour event in Halifax. The Share the Road campaign also traveled to Bridgwater to participate in the seventh annual Growing Green Festival street fair, where our team engaged with the community about road sharing issues and distributed promotional material. SWITCH Open Street Sunday’s, which took place on Agricola Street, was the last summer event for the DalTRAC Share the Road team this year.

Share the Road has recently gained partnerships with multiple municipalities in Nova Scotia, including Pictou County, District of Shelburne, Town of Berwick, Town of Bridgewater, Town of Westville, Town of Port Hawkesbury, and Town of Lunenburg. The campaign has also developed a series of non-traditional partnerships with organizations across Halifax Regional Municipality, including Halifax Public Libraries, Bicycle Nova Scotia’s Women on Wheels program, SuperNOVA camps, and Sportwheels Sport Excellence, furthering the exposure of the campaign. 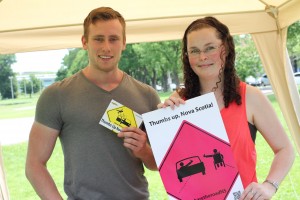 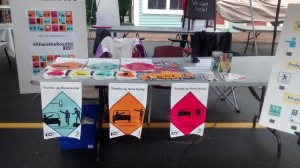 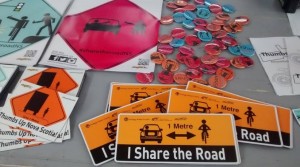 Some of the Share the Road materials available through DalTRAC. 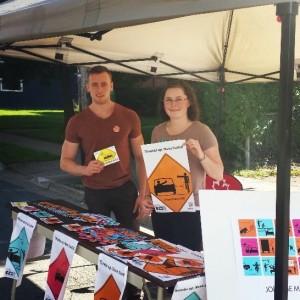 DalTRAC team is glad to invite you all for the Spring 2015 meeting of CITE Atlantic Provinces section. Here you can find the agenda for the upcoming spring meeting on May 7th in Halifax : CITE Atlantic Provinces 2015 Spring Meeting Agenda (1) . This year the session will be held on the Sexton Campus at Dalhousie University in Downtown Halifax. Similar to last years’ meeting, it will have a poster session highlighting some of the projects being undertaken by students with Dalhousie’s transportation group, DalTraC.
For those travelling from out of town, a block of rooms is being held at the Westin Nova Scotian Hotel, just a short walk to the meeting venue, at a rate of $119 (indicate you are part of the ITE Atlantic meeting). Reservations can be made by calling the hotel at 1-888-627-8553 (http://www.thewestinnovascotian.com). The block / rate will be held until April 23rd.
On behalf of the CITE Atlantic Provinces Section executives and organizers, DalTRAC team hope to see you all in Halifax on May 7th!
« Previous Page
Next Page »