CBC News has reported two filmakers from Toronto are set to bring “The Book of Negroes” to the big screen.

Go to CBC’s website to check out the full article here.

Thanks to Nancy for sharing this story with us.

I hope that everyone is enjoying these last weeks of summer before school begins.  If you have any thoughts that you would like to share about the book, please send me an email.

We encourage everyone to participate in the discussion (both online and in September!).

Are you thinking about reading the Book of Negroes, but haven’t had the time to go buy your own copy? 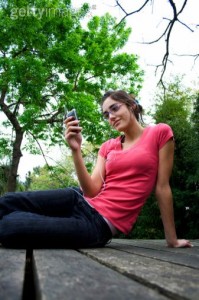 What is a podcast you might ask?
A podcast is a series of digital media files, either audio or video, that is released episodically and downloaded through web syndication. The mode of delivery is what differentiates podcasts from other ways of accessing media files over the Internet, such as simple download or streamed webcasts: special client software applications known as podcatchers (like iTunes, Zune, Juice or Winamp) are used to automatically identify and download new files in the series when they are released, by accessing a centrally-maintained web feed that lists all files currently associated with that particular series. New files can thus be downloaded automatically by the podcatcher and stored locally on the user’s computer or other device for offline use, making it simpler for a user to access episodic content (Wikipedia).

“Between The Covers” is a weekly podcast serializing the best in Canadian literature, from comedy to tragedy. Stories are narrated by some of our finest actors, with new installments each week (Between the Covers Website).

Or we have included the links for you below.

The Dal Reads blog is pleased to post a contribution from the author, Lawrence Hill.

I was thrilled to hear that The Book of Negroes has been selected for Dalhousie Reads.  Part of my enthusiasm stems from fact that much of the novel’s historical underpinnings have to do with the story of the Black Loyalists, before, during and (in the case of those who left Halifax to found the colony of Freetown in 1792) after their time in Nova Scotia.  It strikes me as sad and troubling that so few Canadians have been exposed to such an interesting, dramatic and revealing part of our national history. To my way of thinking, high school history classes would be a whole lot more engaging if students had the opportunity to step into the story of the thousands of Blacks who chose to serve the British on the eventually losing side of the American Revolutionary War, and who then had their names entered into the British naval ledger “The Book of Negroes” before sailing to Nova Scotia in 1783, and who then faced such oppression in what they had hoped to be their “Canaan” that 1,200 of them turned around a decade later and left in a mass exodus for Sierra Leone.  To me, it’s fascinating that the first “back to Africa” exodus from the Americas took place not from the Caribbean or the United States, as one might imagine, but from the shores of Halifax.  Although many Canadians have not been introduced to this part of our history, the good news (in my view) is that when Canadians do have the opportunity to learn about this story, they jump right in and feel quite enriched to expand their awareness.

The other part of my enthusiasm about Dal Reads 2009 is that Nova Scotia feels like a second home to me, and that time and time again Nova Scotians have welcomed me into their homes, libraries, museums, archives, community centres and universities when I have come to do research or to give readings or talks from my books. One of the first literary readings I ever gave was at Dalhousie, when English professor Andy Wainwright invited me in 1993 to read from my just-published first novel, Some Great Thing.  I remember being quite touched by the fact that a few people came out to my reading on the Dalhousie campus, despite the wicked snowstorm that had engulfed the city, and that each person there bought a copy of the book. Since then, I have returned many times to Nova Scotia, and am already anticipating the next visit with pleasure.

Thank you for honouring The Book of Negroes by selecting it for Dal Reads 2009, and I hope that the story excites you, and leads you to concur with my wry and playful observation that perhaps Canadian history isn’t so boring after all.

“What’s in a name? That which we call a rose
By any other name would smell as sweet.”

How do you feel about these two names? Would reading it under a different name change the book for you?

Do you think the name of a book matters?

Hello Everyone,
This post is courtesy of Dr. Marina Adshade, Assistant Professor of Economics at Dalhousie University.  Dr. Adshade will be leading one of the September 9 discussion sessions.

Comments and Questions are encouraged!

“What the Book of Negroes teaches me about spam” 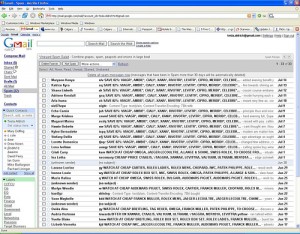 I have had an extremely lucrative year. Just yesterday I learned that I will be receiving my share of a 1.25 billion dollar payout as soon as I send the bank my name, address and bank account information. Good news on the home front too. A super-model from the UK is coming to MY CITY for six months and is going to rent a room in my house. The only condition he has set for paying the $2 million dollars a month rent that I have asked of him is that it needs to be deposited, lump-sum, into my bank account before he arrives. Wow. Honestly, the only way things could get better is if that Nigeria widow, now dying of cancer, gives me millions to build orphanages in MY COUNTRY.

Now certainly not all of these emails I get (several per day, which, by the way, is the price you pay for trying to be cheeky) originate in Africa. But, by and large, they seem to stem from that part of the world. If you think that you have suffered from the annoyance of these repeated attempts to defraud you of your hard earned cash, think of the price being paid by the citizens in countries like Nigeria for the lack of trust, and trustworthiness, in their own countries. Economists have known for a long time that trust plays an important role in the functioning of any society. John Stuart Mill spoke of this when he wrote in 1848 that “The advantage to mankind of being able to trust one another, penetrates into every crevice and cranny of human life: the economical is perhaps the smallest part of it, yet this is incalculable.” But while trust is an important element of any society, the level of trust varies from nation to nation. For example, in a poll that asks Canadians “Generally speaking, would you say that most people can be trusted, or that you can’t be too careful in dealing with people”, 53% of respondents report that they feel most people can be trusted. When a similar question is asked of Nigerians, however, a remarkable 87% respond that most people cannot be trusted.

The level of trust stems of from a variety of factors, not the least of which is the level of trustworthiness of those around you. So what causes some people to behave in an untrustworthy fashion? Well an economist would argue that people will behave in a trustworthy fashion when the returns to doing so outweigh the costs. If you are living in a community (think pre-colonial Africa or rural Canada) that relies heavily on everyone behaving cooperatively, then there is a large benefit to being trusted (and trusting). When the incentives to behaving that way change though, people make different choices.

So what does this have to do with the Book of Negroes and the spam that lands in my email account every day? In the book we find that Aminata Diallo is abducted and sold not by white foreigners but by fellow Africans. In fact, she does not meet a single European until, after a three month walk from her home village, she has reached the Atlantic coast. Her abduction is made possible by individuals who were prepared to behave in a way that, to most of us, seems incomprehensible. The book leaves no doubt that Aminata feels the betrayal of her fellow Africans intensely and those who witnessed it along her route must have been left wondering who to trust. The arrival of the slave trade into Africa changed individual’s incentives to behave in a trustworthy manner and, as a result, the ability of individuals to trust each other. The choice to betray was not in every case founded in greed. Some, like Aminata’s future husband Chekura, chose betrayal in order to protect themselves. Others betrayed their neighbours in order to get weapons so that they could protect their own children. Many others, however, participated in order to achieve wealth and power beyond what they could have achieved by remaining within their own communities, those founded on trust. So the long slave trade in Africa, spanning centuries, shifted societies away from those which were trusting to those that were fearful of betrayal.

You may be sceptical that this effect has persisted until today but data bears out this relationship. New research by Nathan Nunn (Harvard University) suggests that those countries with the lowest trust levels in 2005 (measured using surveys like those mentioned above) are the same countries from which slaves were most intensely taken during the transatlantic slave trade (from 1450 to 1866). The link between slow modern growth rates (in terms of standards of living) and the intensity of slave trading is also not difficult to make. This evidence suggests communities that were most affected by slave trading transitioned to a lower productivity and lower trust equilibrium than those that were less affected.

So next time you find yourself asking, while reading an obviously fraudulent email, how people can stoop so low, try to consider the historic context of the societies that spawned these individuals and how they might have evolved over the centuries of the slave trade. How might Aminata’s community have changed as they fought to hold themselves together and to maintain their way of life. And more importantly, within the context of this discussion, ask yourself what happened to the descendents of the bandits who participated in the slave trade after the traders left the continent. Perhaps now they are roaming the internet cafes of Abuja still seeking wealth and power.

Watch CBC’s Jian Ghomeshi with Avi Lewis and author of The Book of Negroes, Lawrence Hill. Aired originally on March 9, 2009.

This blog is a forum where you are able to share and your thoughts about Lawrence Hill’s The Book of Negroes (in the USA, Australia and New Zealand, this book is published under the title Someone Knows My Name).  All incoming students are encouraged to read this book for September.

This is an exciting opportunity for all upcoming students to be engaged and participate in conversations based on their shared experience of reading the book.  By participating in this initiative, you will be in excellent company!  Many universities and communities across North America have conducted similar programs, including Northwestern University, Michigan State University, Toronto, and Vancouver.

Keep checking the blog for exciting discussions and lots of interesting information about the book.