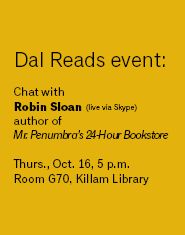 Robin Sloan, author of Dal Reads’ 2014 selection Mr. Penumbra’s 24-Hour Bookstore will join us live via Skype in Room G70 of the Killam Library on Thursday, October 16 at 5 p.m.

First, Robin will talk about the book, then take questions from the audience. This is your chance to ask him anything you’ve ever wanted to know about his NY Times best-selling book, which started as a short story on his website.

If you haven’t yet had a chance to read the book, now is the time to do so. The New York Times Book Review said it was, “Part love letter to books, part technological meditation, part thrilling adventure, part requiem… Eminently enjoyable, full of warmth and intelligence.”

Don’t miss this Dal Reads event. There will be delicious snacks and great book talk. 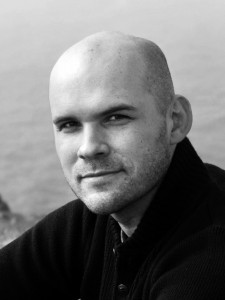