This morning we woke up with the peaceful sunrise to check if there were any rodents in the traps. We found a multimammate mouse and a vicious juvenile Greater Red Musk Shrew. After re-baiting the traps, we then went to set up the bird mist netting with Dr. Ben Smit and his PhD student Krista Oswald. Not long after the net was set up, we caught our first bird. This was identified as a male lesser double collared sunbird. We then left the nets while we went to eat breakfast. For breakfast we had a traditional South African dish called umphokoqu (which you pronounce with a tongue click at the end), which is a corn meal and sour milk called amasi, a dish eaten in the morning. Janessa was the only student brave enough to try it, in fact she went for seconds. She said it tasted like a sour cream mash, it wasn’t bad. After we finished up our breakfast we then all went down to the classroom to check the bird netting again and to begin the monitoring and banding procedure. During the time we were gone three more birds were caught. These included two Somber Greenbuls, and a Cape Batis. Once captured, Krista then banded just above the foot and measured on different parameters. We then released the birds and took down the nets. After the nets were all taken down we then went into the classroom to learn about the diversity of bird species within differing biomes of South Africa. Most interestingly, we learned about the differences (slight change in phenotype and therefore genotype as well) of bird species depending on the biome they are found. 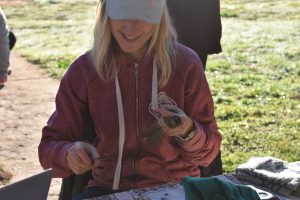 Krista Oswald showing the students how to process birds after bird mist netting. 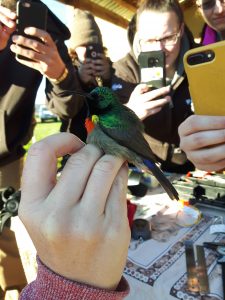 After the lecture, the group separated to collect data for their individual projects. One student collected ultrasonic bat calls. One group went out to check various camera traps. This group had some interesting results when they came across a camera which was removed from the tree by an elephant. The group also saw baboons, warthog, kudu, and a wild Dan. Another game drive went out to collect fresh giraffe poop. On this drive they also had a tasty snack of termites which had a unique taste. In addition, this group observed elephant and zebra. The last group went out a little later in the afternoon to scope out the location for vegetation and soil analysis. We all met up again to have dinner and catch each other up on what we did today. The group enjoyed the warm sunny weather today and the vast amount of animal species Amakhala has to offer. We are excited for tomorrow to see several reptile and amphibian species found in South Africa. 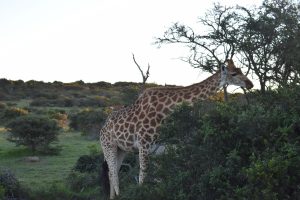 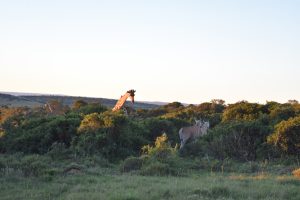 The difficulties of collecting giraffe fecal and then distinguishing it from eland.