We began another adventurous day at Woodbury Tented Camp in Amakhala Game Reserve first thing at 7:00am. After a quick breakfast both groups went out to the rodent traps to check and see if we had captured any. Unfortunately, all traps were empty….again! Research groups then separated and began or continued to collect data for the various projects being conducted: elephant behavioural observations, prey species vigilance observations and giraffe poo (sorry feces) collection. One group even saw a Giraffe off of the front deck. After a few hours of data collection we gathered back together to walk to the classroom for a guest lecture. The lecture was given by a wildlife veterinarian named Dr. Lisa Graham. Dr. Graham gave us all a wonderful insight into what it was like being a wildlife veterinarian for a small game reserve and the work that it takes to ensure the health of the animals. After a short break Dr. Graham lectured us on her research regarding Rhino home range sizes and how they differ depending on the game reserve size. 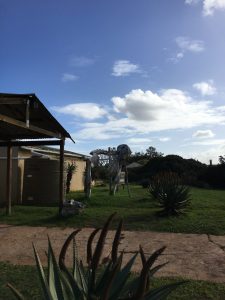 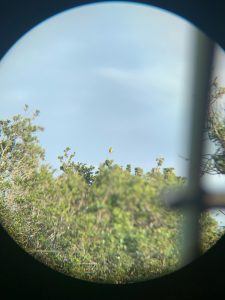 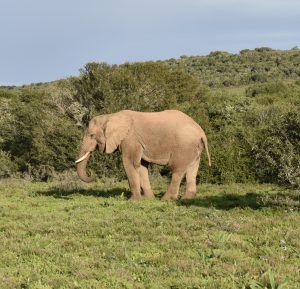 After a wonderful lunch of umngqusho, which is a South African meal made of corn and kidney beans. We all prepared ourselves for a moving documentary on Rhino Poaching in South Africa. On our way down to the classroom Dan hid in some nearby thicket and decided it was a good idea to jump scare all of the students passing by. The movie focused on the trade and sale of Rhino horn across the world and its ecological impact on the species. After the documentary concluded we went out to check the rodent traps once more. To our surprise we had managed to catch a Vlei rat, Otomys irroratus, in one trap and a Cape Robin-Chat a type of bird!) in another! The bird was not very pleased to have been captured but was soon released back into the wilderness safe and sound. The rat’s weight was recorded and other data was taken before it was released back where it was captured. We all separated for some free time before dinner to collect data or work on our journals. After a wonderful dinner we spent the rest of the night relaxing before bed.

Tonight we get some downtime to relax and have some fun at the Sidbury Cricket Club after supper!

This is written by Katie G, Katie S & Stephanie