Today we decided to mix it up for breakfast and had oats. Everyone loved it and there were no leftovers. Once finished we headed to the conference room for our first lecture.  The lecture was given by Kyle Smith, who is a scientific researcher for South African National Parks, on the Tsitsikamma Marine Protected Area (MPA) and marine conservation, regarding fish species preservation and fishing. This was a very interesting talk that had us thinking about not just the science behind preserving species but also the affect protected areas have on the community around them that would have had access to them before it became protected. The video footage shown from the cameras they put just off the coastline showed a number of fish species but also showed us that sharks actually come pretty close to the shore in quite shallow water. After the lecture we got a couple hours to ourselves to rest, check out the shop or explore the beach. Since it was a gorgeous day, a few hours of free time were much appreciated! We all had lunch at the guest house and got to taste naartjies (a fruit that is a cross between orange and a clementine), which are amazing. This gave us fuel to what was going to come after lunch!!! 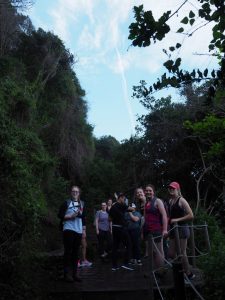 Part of the group on a suspension bridge

After lunch, we all headed out with our water bottles and cameras for a hike. The hike started from the beach and went all the way to the top of the Cape Fold Mountains to a lookout. It included multiple suspension bridges and was a very intense excursion, for some. Some of the trail had wooded steps while others were barely a rock goat path. To the top the hike was 3 kilometers but took about an hour or more. So the total hike was 6 kilometers give or take. Despite being challenging, it was well worth the struggle and to finally reach the lookout was invigorating and gave us a sense of achievement.  Along the way we saw many Dassie’s (rock Hyrax) and the King Protea, the national flower of South Africa. Once getting back down to the beach, many of us went for a quick dip in the Indian Ocean. Most of us were exhausted from the hike and went back to our oceanettes to shower up and have a quick nap before supper. 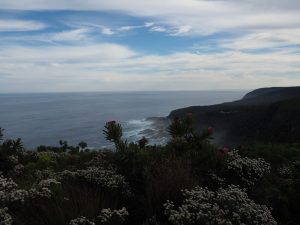 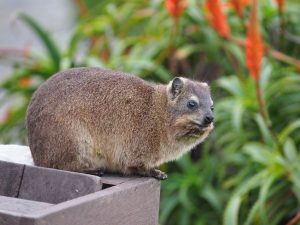 Question for everyone, except Dean Gray: What is the closest living relative to a dassie (it is about the size of a groundhog)? We will give you a couple of days to figure this out.

This is Marissa and Taylor signing off after another tiring but fun-filled day.