We started our first day at the Storms River Rest Camp at 7:30am with a nice breakfast at the main house. While at the main house we finally discovered what our rumored surprise was going to be. Instead of having a scheduled lecture, we were going to be visiting 3 different sanctuaries; Monkeyland, Birds of Eden, and Jukani which was a carnivore sanctuary. We drove the few kilometers to the first park and awaited the tour guide. 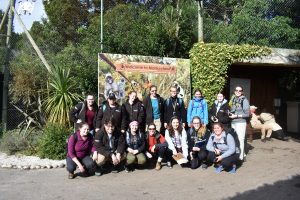 The monkeys within the park were free roaming and we were able to view them up close. We saw a number of different monkeys from the common Vervet monkey, to ones from other parts of the world, such Spider monkey, Gibbon monkey, Capuchin monkey (as in  the movie ‘Night at the Museum’ and the ‘Pirates of the Carribean’), Squirrel monkeys, Ring-tailed lemurs (minus King Julian) and Black and White Ruff lemurs. As the tour continued we also crossed a massive suspension bridge over the park, Vervet monkeys strayed all over the bridge, and having been forewarned about the monkeys, we were wary of our belongings. Thankfully, only a pair of glasses were taken, albeit a small shock to us, we learned our lesson the hard way around the kleptomaniac monkeys. 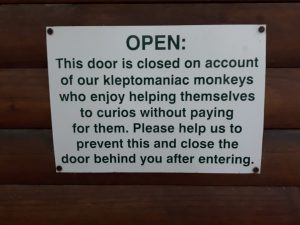 When we arrived at the Birds of Eden sanctuary, immediately out the door into the enclosed forest a small parrot made friends with Dr. Parker and didn’t feel like leaving. Dr. Gray also was blessed with two Indian Ringneck Parakeets, yet one decided to take a taste. As we toured the remainder of the sanctuary, multiple species were flying around us and perching on the railings around us. We even saw some Canadian Geese! Some of the other birds that we observed included; Rainbow Lorikeets, Dusky Lorys, Knysna Turacos and Flamingos, a drop in the bucket to name a few. After we were all rounded up we boarded the van to go on our next adventure. 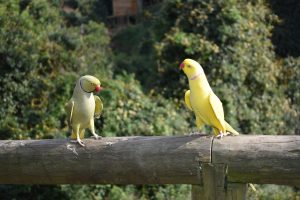 The culprit who tasted Dr. Gray is the yellow one on the right. 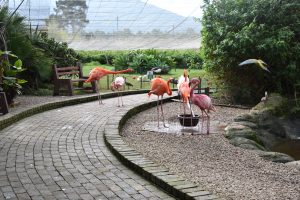 Flamingos at Birds of Eden.

The afternoon itinerary began after an amazing lunch at the Peppermill restaurant. We then piled into the van and drove to Jukani Large Carnivore Sanctuary. This guided tour took the better part of 2 hours and included tours around multiple large cat enclosures. We were able to see Bengal Tigers (both normal and white), Caracals, Black-Backed Jackals, Spotted Hyenas and more. The tour concluded with the Lion enclosure.

Our evening concluded with a very tasty BBQ (Braai) of chicken skewers (sosaties) and South African sausages (boerwors), ostrich, Kudu biltong and salad. Some of us had tried ostrich burgers for lunch, but for most of us it was our first taste. From a tired group of students at Storms River Mouth Camp, this is Katie (George) and Morgyn signing off.