We were  able to sleep in last night as we only had to be at breakfast at a ‘late’ 7am rather than 6.45am. We then had a nice breakfast of scrambled egg, beans, sausage, bacon and toast, and we had plenty of time to eat it as we only had to leave at 9.15am. We all used this time to work on our journals and projects, we always appreciate time to catch up with our work.

At 9.15am we went to the Sidbury Cricket Club for the ‘Coaching for Conservation’ 8km run/walk, through the ‘safe’ part of Amakhala Game Reserve. Unfortunately smoke was clouding the area from the Port Elizabeth wildfires which blew into the area, about 150km away. This cast a bit of a grim mood on everyone as we were smelling burnt homes, schools and hospitals. All the same we geared up for the run and made our way to the start line. The course was quite nice but it had a nasty hill in the beginning but by km 4 the downhill portion started and it got much easier. The views were stunning and it made for a great run and the AWE times ranged from 52 mins – 1 hour 40 mins, people walked and people ran but we all enjoyed the race. We then had boerewors rolls for lunch which is a beef sausage in South Africa. The sausages were wonderful! After that we headed back to the Woodbury Tented Camp to shower and work on journals, projects etc. 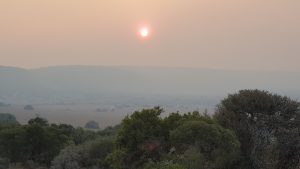 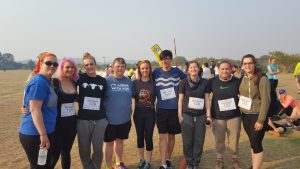 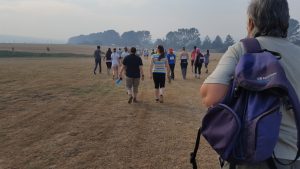 At 3.30pm we all piled into the minivan to go visit Grahamstown about 45 mins east of Amakhala. Once we got there we did a driving tour of Rhodes University where Prof. Dan Parker is a faculty member. They have a very historic campus as many of their buildings are old British military facilities which were used in many battles in the Frontier Wars during the Colonial era. We then went to supper at the ‘Rat and Parrot’ which was Dan’s former employer and a favorite with Rhodes University students. They are a great restaurant that specializes in steaks and pizza. Some were brave enough to try bacon and banana pizza, which according to brave souls like Maddie is quite good! We all headed back to camp for an early sleep and end to a calm day in South Africa!

This comes to you compliments of David!!! 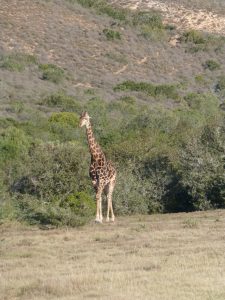 Oh yes, we all saw a giraffe this morning on our way to the run.