This morning our entire group looked like zombies when we woke up due to the fact that the wind was blowing so hard last night that our tents were shaking. We were up for six to checks he sherman traps to see if there were any rodents in them. We caught two different species of rodents, a veil rat and multimammate mouse. After checking the rodents, we released them, and headed up for breakfast. During breakfast, I decided to take a nap at the table, but not long after moved to the couch in the common area where Ashley and I took a team nap. After the little bit of rest that we got, we went for a lecture.

The lecture this morning was on the impacts that elephants had and have on the vegetation over 10 years. It was given by Gareth, who does his research on the vegetation of different game reserves in South Africa.  After the lecture, David, Janine, Jessica, and I went on a drive throughout the reserve with Simone to collect some data for our projects. This experience was a bit tougher than I thought it was going to be, as collecting poop is a time dependent activity, due to the fact that shortly after it hit the ground, it bakes. So finding fresh stuff was difficult. While Maddie and Lenka were searching for herps (not what you might think), amphibians and reptiles; Ashley and Nikki had checked the Sherman traps. Everyone got a start on their projects’ making it a very productive morning, and eagerly waited for lunch, and then got back to our research.

After lunch, David, Ashley, Nikki and I were on “poop patrol” and went back out to the reserves to collect samples. Practice makes perfect because this time, poop was dropping and we went running when Simone deemed it was safe. We saw an elephant who thought she was separated from the parade, because she was on the other side of the river. She was running and calling for them and had to cross the river to be reunited. It was an great opportunity to experience elephant socialization. Lenka, Maddy and Jess collected information for their research projects. We then all got together to discuss tomorrow, which will be very exciting so you’ll have to stayed tuned to hear more about it! 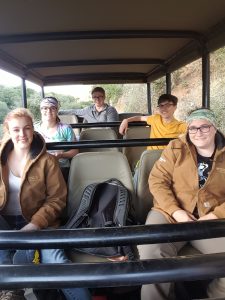 Poo Patrol on the job! 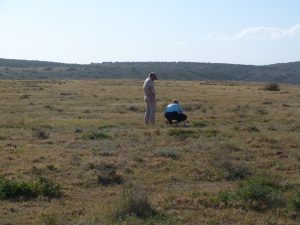 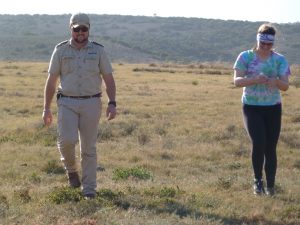 And they return victorious, bag in the hand!